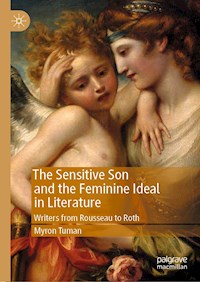 The Sensitive Son and the Feminine Ideal in Literature ebook

This book considers major male writers from the last three centuries whose relation to a strong, often distant woman—one sometimes modeled on their own mother—forms the romantic core of their greatest narratives. Myron Tuman explores the theory that there is an underlying psychological type, the sensitive son, connecting these otherwise diverse writers. The volume starts and ends with Jean-Jacques Rousseau, whose Confessions provides an early portrait of one such son. There are chapters on other adoring sons, Stendhal, Sacher-Masoch, Scott Fitzgerald, and Turgenev, as well as on sons like Bernard Shaw and D.H. Lawrence with a different, less affectionate psychological disposition toward women. This book demonstrates how, despite many differences, the best works of all these sensitive sons reflect the deep, contorted nature of their desire, a longing that often seems less for an actual woman than for an elusive feminine ideal.