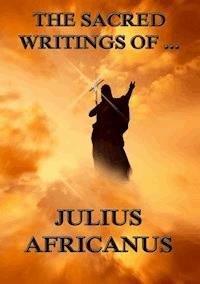 "The Sacred Writings Of ..." provides you with the essential works among the Early Christian writings. The volumes cover the beginning of Christianity until before the promulgation of the Nicene Creed at the First Council of Nicaea. Julius Africanus is the father of Christian chronography. Little is known of his life and little remains of his works. He is important chiefly because of his influence on Eusebius, on all the later writers of Church history among the Fathers, and on the whole Greek school of chroniclers. This volume contains the following works: I.-The Epistle to Aristides. II.-Narrative of Events Happening in Persia on the Birth of Christ III.-The Extant Fragments of the Five Books of the Chronography of Julius Africanus. On the Mythical Chronology of the Egyptians and Chaldeans. On the Deluge. Of Abraham. Of Abraham and Lot. Of the Patriarch Jacob. On the Seventy Weeks of Daniel. On the Fortunes of Hyrcanus and Antigonus, and on Herod, Augustus, Antony, and Cleopatra, in Abstract. On the Circumstances Connected with Our Saviour's Passion and His Life-Giving Resurrection. IV.-The Passion of St. Symphorosa and Her Seven Sons.

II.-Narrative of Events Happening in Persia on the Birth of Christ

III.-The Extant Fragments of the Five Books of the Chronography of Julius Africanus.

On the Mythical Chronology of the Egyptians and Chaldeans.

Of Abraham and Lot.

Of the Patriarch Jacob.

On the Seventy Weeks of Daniel.

On the Fortunes of Hyrcanus and Antigonus, and on Herod, Augustus, Antony, and Cleopatra, in Abstract.

On the Circumstances Connected with Our Saviour's Passion and His Life-Giving Resurrection.

Julius Africanus is the father of Christian chronography. Little is known of his life and little remains of his works. He is important chiefly because of his influence on Eusebius, on all the later writers of Church history among the Fathers, and on the whole Greek school of chroniclers. His name says that he was an African; Suidas calls him "a Libyan philosopher". Gelzer ("S. Julius Africanus", pp. 4, 5) thinks he was of Roman descent. He knew Greek (in which language he wrote), Latin, and Hebrew. He was at one time a soldier and had been a pagan; he wrote all his works as a Christian. Tillemont deduced that he was a priest from the fact that he addresses the priest Origen (in his letter to him) as "dear brother" ("Mémoires pour servir à l'histoire ecclésiastique", III, Paris, 1693, 254). Gelzer (op. cit., 9) points out that a friendly Christian layman could quite well use such a form. The statement that Julius Africanus was a bishop does not appear till the fourth century. It is probably an error. He went to Alexandria to study, attracted by the fame of its catechetical school, possibly about the year 215 (Eusebius, "H. E.", VI, 31). All the dates of his life are uncertain. One tradition places him under the Emperor Gordianus (238-244; Gelzer, p. 7), another mentions him under Alexander Severus (222-235; id., p. 6). He appears to have known Abgar VIII, the Christian King of Edessa (176-213); in his Chronography he calls him a "holy man" (Gelzer, p. 3). Eusebius, in his chronicle (ad a. Abr., 2239, ed. Schoene, II, Berlin, 1875, 178), says that under Alexander Severus the city of Emmaus in Palestine was restored and called Nikopolis under the direction of "Julius Africanus the writer of the Chronicle". It appears that he lived there for a time (Bardenhewer, "Patrologie", Freiburg, 1894, p. 173). He shows in his Chronicle that he knows the topography of Palestine (Gelzer, p. 10). He seems to have been in Greece; he went to Rome about the year 221 (id., 11). Bardenhewer (op. cit., p. 173) puts his death at about 237. Preuschen (in Harnack, "Gesch. der altchristlichen Litteratur", p. 507) says that he died "after 221" and adds "under Gordianus 238-244?". Harnack ("Realenc. für prot. Theol. u. Kirche", Leipzig, 1901, IX, 627) says, "after 240".

The works of S. Julius Africanus are: (1) The "Chronicle" (Gk. Chronographiai) in five books, covering the time from the Creation (B.C. 5499 in his calculation) to the third year of Eliogabalus (A.D. 221). Gelzer thinks he wrote this work between 212 and 221 (op. cit., 12). It is an attempt to combine the account in the Bible and the secular (Roman and Greek) history known to the author, with special regard to chronology. From the third book the order is strictly chronological. Julius uses as sources first the Bible, then Greek, Roman, and Jewish historians, especially Justus of Tiberias, who depends on Josephus. He is also influenced by the "Stromata" of Clement of Alexandria (Gelzer, 19-24). As the first Christian attempt at a universal history, and as the source of all later Christian chronography, this work is of great importance. Eusebius made it the foundation of his chronicle. It is the source of all later Byzantine writing of history, so that for centuries the Christian world accepted the dates and epochs calculated by Julius. Only fragments of this work are now extant.

(2) The "Embroideries" (Gk. kestoi; compare the title of Clem. Alex.: stromata), also called "Puzzles" (Gk. paradoxa), is a kind of encyclopedia of sciences — mathematics, botany, medicine, etc. — full of all manner of curious anecdotes and illustrations. It has been thought that the author of this work was a pagan, Sextus Africanus, different from the Christian Julius Africanus. This is directly contradicted by Eusebius in his "Chronicle" (H.E., VI, 31): "Africanus (the author of the 'Chronographia'), writer of the composed Embroideries" (Gk. ho ton epigegrammenon keston syggrapheus). Gelzer (2-3) has shown that the author of the kestoi was a Christian (he quotes Ps. xxxiii, 9) and that there is no reason to doubt Eusebius's statement. This work, too, constantly quoted and much esteemed by the Greek Fathers, survives only in a few fragments about agriculture and war (Gelzer, 13-16). It had originally twenty-four books. It is from the kestoi, in which the author discourses of magic, divination and medicine, that the opinion arose that he was a physician.

(3) Two letters of Julius are known, one to Origen, in which he disputes the authenticity of the story of Susanna, pointing out that the play upon words in the Greek text (prinos, an oak-tree, and prio, to saw asunder; schinos, a mastic-tree and schizo, to cleave: Dan., xiii, 54-55, 58-59) would not exist in Hebrew or Aramaic. From his address in this letter (Kyrié mou kai huié) he seems to have been an old man when he wrote it. Origen answered it. Both letters are included in Origen's works (e.g., ed. of De la Rue, I, Paris, 1733, 10). This letter is the only one of Julius's works that is completely extant. His criticism has won for him high respect among modern writers. J. G. Rosenmüller (Historia Interpretationis, III, 161) considers that these few lines contain more true exegesis than is to be found in all Origen's works. Gelzer (p. 17) points out that the "Chronography" and especially the kestoi show that Julius does not deserve his reputation as a critic. The other letter is addressed to a certain Aristides. In it he proposes what is still the favourite explanation of the two pedigrees of our Lord (Matt., i, 2-19; Luke, iii, 23-38), namely that St. Joseph's two fathers, Jacob (Matt., i, 16) and Heli (Luke, iii, 23), were half-brothers of the same mother, that Heli died without children, and Jacob took his wife to raise up seed to his brother according to the Levitical law (Deut., xxv, 5-6). Of this letter a fragment is preserved by Eusebius (H. E., I, vii), another fragment is contained in an epitome of Eusebius's "Quæstiones de differ. Evang.", published by A. Mai ("Nova Patrum bibliotheca", IV, Rome, 1852). Julius also translated Tertullian's "Apologeticum" into Greek (Harnack in "Texte und Untersuchungen", VIII, 4).

Later Syrian writers mention works that have disappeared. Dionysius Bar-Salibi speaks of a commentary on the Gospels (Assemani, "Bibliotheca Orientalis ", II, Rome, 1721, 158), Ebed-Jesu of commentaries on the New Testament (Hebediesu, "Catalogus librorum chaldæorum", Rome, 1633, p. 15). Spurious works are the Acts of St. Symphorosa (Ruinart, "Acta primorum martyrum", Ratisbon, 1859, 70), a Latin version of Abdias's "History of the Apostles" ("Historiæ apostolicæ, auctore Abdia", Cologne, 1576, which asserts throughout, even in the title, that it was translated from the Hebrew by Julius Africanus) and an astonishing semi-pagan "Interpretation of the things that happened in Persia through the Incarnation of our Lord and God and Saviour, Jesus Christ" (ed. by Ignaz von der Hardt in J. C. von Aretin's "Beiträge zur Gesch. u. Litter.", II, Munich, 104, 52-69). St. Jerome in his "de Viris illustribus" (no. 63) includes: "Julius Africanus, of whom five books de temporibus [=the Chronography] are extant, accepted a mission for the restoration of the city of Emmaus, afterwards called Nicopolis, under the Emperor Marcus Aurelius Antoninus, who succeeded Macrinus. There is a letter to Origen about the question of Susanna in which he says that this fable is not in the Hebrew, nor does apo tou prinou prisai kai apo tou schisou schisai agree with Hebrew etymology; against whom Origen wrote a learned letter. There exists also another letter of his to Aristides in which he discusses at length the disagreement which seems to be in the genealogy of the Saviour in Matthew and Luke." Except for the wrong date (M. Aurelius) this account, taken from Eusebius, represents very fairly what we know of Africanus.

[a.d. 200-232-245.] In a former volume, strengthened by a word from Archbishop Usher,1I have not hesitated to claim for Theophilus of Antioch a primary place among Christian chronologists. It is no detraction from the fame of our author to admit this, and truth requires it. But the great Alexandrian school must again come into view when we speak of any considerable achievements, among early Christian writers, in this important element of all biblical, in fact, all historical, science. Africanus was a pupil of Heraclas, and we must therefore date his pupilage in Alexandria before a.d. 232, when Dionysius succeeded Heraclas in the presidency of that school. It appears that in a.d. 226 he was performing some duty in behalf of Emmaus (Nicopolis) in Palestine; but Heraclas, who had acted subordinately as Origen's assistant as early as a.d. 218, could not have become the head of the school, even provisionally, till after Origen's unhappy ordination.2Let us assume the period of our author's attending the school under Heraclas to be between a.d. 228 and a.d. 232, however. We may then venture to reckon his birth as circa