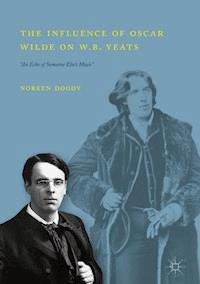 The Influence of Oscar Wilde on W.B. Yeats ebook

272,52 zł
This book asserts that Oscar Wilde (1854 – 1900) was a major precursor of W.B. Yeats (1865 – 1939), and shows how Wilde’s image and intellect set in train a powerful influence within Yeats’s creative imagination that remained active throughout the poet’s life. The intellectual concepts, metaphysical speculations and artistic symbols and images which Yeats appropriated from Wilde changed the poet’s perspective and informed the imaginative system of beliefs that Yeats formulated as the basis of his dramatic and poetic work.

Section One, 'Influence and Identity' (1888 – 1895), explores the personal relationship of these two writers, their nationality and historical context as factors in influence. Section Two, 'Mask and Image' (1888 – 1917), traces the creative process leading to Yeats’s construction of the antithetical mask, and his ideas on image, in relation to the role of Wilde as his precursor. Finally, ' Salomé: Symbolism, Dance and Theories of Being' (1891 – 1939) concentrates on the immense influence that Wilde’s symbolist play, Salomé, wrought on Yeats’s imaginative work and creative sensibility.