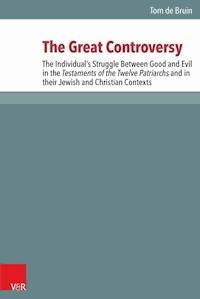 The Testaments of the Twelve Patriarchs (T12P), one of the longest texts of the so-called “Old Testament Pseudepigrapha,” presents the fictitious farewell speeches that the twelve sons of Jacob held on their respective deathbeds. Tom de Bruin examines these twelve monologues as literary products in order to understand the function of the text for the setting in which it was composed. He approaches T12P from three directions: an analysis of the paraenetic parts, a discussion of the anthropology, and a comparative examination of other contemporaneous works documenting a world-view similar to T12P.These three approaches merge into a detailed discussion about the reasoning behind the admonition in T12P, and identifies the fundamental message of the text, namely that each person stands between the forces of good and evil and that this person is called to constantly decide which way to follow. Though T12P is still familiar with the apocalyptic origin and plays with the cosmological implications of this 'great controversy', the text clearly puts the emphasis on the battle inside each individual. It is thereby an important witness for reinterpreting and reapplying apocalyptic traditions through ethicizing them and focusing on the individual. Such an individualistic application of the 'great controversy' theme can be found in a number of other (mostly Christian) works, revealing a similar understanding of mankind’s existence and development as in T12P. The analysis of the ethical reappropriation of apocalyptic traditions in T12P provides important insights into the foundations of early Christian ethics, ancient anthropology, and the Jewish and Christian understanding of the struggle between good and evil.