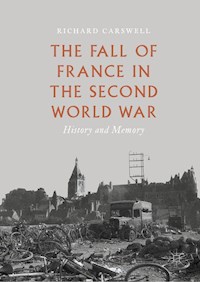 The Fall of France in the Second World War ebook

This book examines how The Fall of France in the Second World War has been recorded by historians and remembered within society. It argues that explanations of the fall have usually revolved around the four main themes of decadence, failure, constraint and contingency. It shows that the dominant explanation claimed for many years that the fall was the inevitable consequence of a society grown rotten in the inter-war period.  This view has been largely replaced among academic historians by a consensus which distinguishes between the military defeat and the political demise of the Third Republic. It emphasizes the contingent factors that led to the military defeat. At the same time it seeks to understand the constraints within which France’s policy-makers were required to act and the reasons for their policy-making failures in economics, defence and diplomacy.