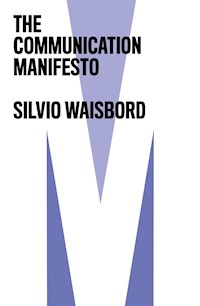 Contemporary societies demand clear-minded, evidence-based ideas to address complex social issues. Communication scholarship has a rich trove of knowledge and experiences to help address such problems. In this passionately argued manifesto, Silvio Waisbord examines public scholarship in communication studies and its potential for contributing to the common good. He discusses the various ways scholars seek to serve the public as practitioners, experts, advocates, activists and critics, and underscores their significant contribution which has not, to date, been properly supported or recognized. Only by tackling academic institutional politics, he argues, will it be possible to strengthen public scholarship as central to the mission of communication studies. The Communication Manifesto is a roadmap to action and will inspire communication scholars and students to be public citizens, thereby connecting their work and expertise to the causes of solidarity, humanity and social justice.

What is public scholarship?

Public intellectualism and its problems

The challenges of public communication

Decide the public scholar you want to be

Bolster public scholarship in both universities and scholarly cultures

The right of Silvio Waisbord to be identified as Author of this Work has been asserted in accordance with the UK Copyright, Designs and Patents Act 1988.

First published in 2020 by Polity Press

All rights reserved. Except for the quotation of short passages for the purpose of criticism and review, no part of this publication may be reproduced, stored in a retrieval system or transmitted, in any form or by any means, electronic, mechanical, photocopying, recording or otherwise, without the prior permission of the publisher.

Every effort has been made to trace all copyright holders, but if any have been overlooked the publisher will be pleased to include any necessary credits in any subsequent reprint or edition.

For further information on Polity, visit our website: politybooks.com

I am grateful to Mary Savigar for the invitation to contribute to Polity’s series on manifestos in communication and media studies. Her invitation came as I was completing my book on the state of communication studies, also with Polity. The offer was appealing yet daunting. It was an opportunity to develop ideas I had been thinking through for a while, even if the suggested title, The Communication Manifesto, with echoes of Marx and Engels’ masterpiece of the manifesto genre, was intimidating. Also, writing a manifesto, as “poeticized action” in Tristan Tzara’s (1981) definition, was not in my wheelhouse. Prescriptive, action­oriented, rousing briefs were not the preferred style of my written scholarship. I have been more inclined to dissect media and communication questions and parse academic arguments than to urge colleagues to take political action. Eventually, I enthusiastically accepted Mary’s offer after concluding that the manifesto genre is suitable to make an argument for why communication studies needs to step up interventions with non-academic publics.

I have been intrigued about the role of intellectuals in public life since reading Karl Mannheim’s Ideology and Utopia for a sociological theory course in college in 1979, during the last military dictatorship in Argentina. Reading Mannheim’s argument in favor of public intellectualism while I was living under authoritarianism was a jarring and critical moment (perhaps not exactly the intention of the faculty, who had been appointed by the regime). The dictatorship persecuted, tortured, and disappeared intellectuals, scholars, and scientists who were engaged in dissident politics and had worked with political parties, unions, alternative media, guerrilla movements, low-income communities, and social movements. In my mind, Mannheim’s argument endorsed the idea, well established in Latin American intellectual history, that scholars should be actively involved in public affairs beyond the classroom. Knowledge is socially and politically grounded, he argued. My academic surroundings proved his point, even amid military repression of critical thinking. Politics infused virtually everything – curricula, classroom discussions, faculty ­appointments – before, during, and after the dictatorship. Once the pro-democracy movement gained ascendancy, students’ activism ran high in the streets and university politics. In this context, it was natural to wonder about one’s position in public life, even as a budding scholar.

I continued to ponder these issues after I moved to the United States in the late 1980s and throughout my academic career. These matters became more concrete after I left academia to work on communication research and practice in international development. I regularly collaborated with government agencies, civic society organizations, scientists and technical experts, and activists’ groups. Although this book is not a memoir, it gave me the opportunity to take stock of my thoughts and experiences.

The focus of the book is on public scholarship in communication studies: interventions by communication scholars in the public sphere beyond academic campuses. If manifestos are part sermon, part technical guide, as Terry Eagleton (2017) wonderfully put it, this manifesto hopes to be the latter more than the former. As a reader, I never found the high-minded tone of manifestos engaging, although some examples, notably Thomas Paine’s Common Sense as well as the pamphlets by early twentieth-century artistic vanguards, were hugely formative readings. Like any manifesto, this book makes a normative argument and offers recommendations with the hope to influence conversations and actions.

Thanks to Sarah Dicioccio for her excellent assistance with various aspects of this book. I am grateful to Ellen MacDonald-Kramer, Justin Dyer, and everyone else at Polity for their support throughout the process. Two reviewers offered thoughtful feedback.

Calls for public scholarship have been frequent in the social sciences and the humanities in recent years. Influential voices across the disciplines have urged colleagues to utilize their expertise for the betterment of society and warned about the problems of producing knowledge exclusively for fellow academics (Burawoy, 2005; Calhoun, 2004; Oakes, 2018). Communication scholars, too, have made similar appeals to contribute to society, social justice, and communication professions (Dempsey et al., 2011; Rosen, 1995). These appeals reflect two issues. One is the recognition that not enough is done to make academic knowledge socially significant and impactful: to help societies understand and address a host of problems by tapping into accumulated knowledge (Bastow, Dunleavy & Tinkler, 2014; Hanemaayer & Schneider, 2015). The other issue is growing concerns about the (ir)relevance of academic disciplines and knowledge (Flinders, 2013; Hoffman, 2016; Peters, Pierre & Stoker, 2014) in society at large. If scholars do not take the question of social relevance seriously, academic scholarship runs the risk of remaining important for scholars, but unrecognized or, worse, dismissed by society.

Calls for public scholarship have sparked much conversation and soul-searching, as reflected in the themes of scores of panels and publications. It seems that virtually everyone believes public scholarship matters. It is hard to imagine anyone would say otherwise. I haven’t heard anyone proudly affirming in a big public forum: “Stick to conventional scholarship and forget society or contributing to the social good.” There are no two neatly defined, warring camps about public scholarship: those in favor and their opponents entangled in a battle over the soul and the purpose of academe (see Mulholland, 2015). Public scholarship is generally praised without much vocal opposition. It is unclear, however, whether rousing calls for action have resulted in large-scale, concrete, and sustainable actions that have turned public scholarship into a central aspect of academia. The irony should not be overlooked: without effective action, calls for public scholarship may generate additional scholarship, in the form of publications, courses, and symposia, but the actual impact on society may be negligible.

In this book, I make a call for public scholarship in communication studies with the hope of contributing ideas to conversations and actions. Academics should contribute to society in more ways than by producing knowledge and exchanging ideas with students and fellow scholars. Contra conservative thinkers, who have generally bemoaned the public role of intellectuals, I believe communication scholars make important, unique contributions to public life. By bringing a wide range of expertise and skills, they collaborate with actors and communities in efforts to improve public life and make societies more tolerant, informed, empathetic, egalitarian. Their actions reflect a concern with addressing real-world problems rather than only dealing with typical scholarly questions about theories, methodologies, arguments, and so on. They represent a gradual shift in the gravitational center of scholarship to highlight what Rasmus Nielsen (2018, p. 147) calls “context-driven, problem-focused, and interdisciplinary forms of knowledge production.” So what is needed is to link knowledge production with practice by understanding the causes of communication and social problems in specific settings, identifying possible solutions, producing evidence-based analysis and recommendations, and supporting collective competencies and actions.

The vision of public scholarship presented here differs from conventional notions that believe interventions beyond academia are limited to the models of the public intellectual and the scholar-activist. These models, I argue, are two possibilities among a range of possible performative and normative positions scholars take. The model of the public intellectual is linked to the view that scholars are members of the “republic/men of letters” who impart wisdom and guidance to elites and the masses – those who, in the words of Mannheim (1936, pp. 142–143), “provide an interpretation of the world … in what otherwise would be a pitch-black night.” Even if some scholars fit this model, as they make forays into the news media, public scholarship is not synonymous with “public intellectualism.” The latter has analytical and normative problems for comprehending the multiple connections between communication studies, public life, and social justice. The model of the scholar-activist is also only one option for public scholarship. Just as there is no single model of scholarship in communication studies, public scholarship also takes different shapes: community-embedded scholars,