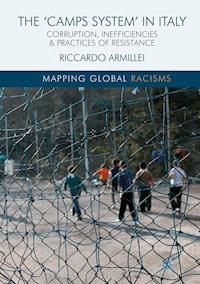 The ‘Camps System’ in Italy ebook

431,13 zł
This book deals with the social exclusion of Romanies (‘Gypsies’) in Italy. Based on interviews with Romani individuals, institutional and Civil Society Organisations’ (CSOs) representatives, participant observation and a broad range of secondary sources, the volume focuses on the conditions of those living in Rome’s urban slums and on the recent implementation of the so-called ‘ Emergenza Nomadi’ (Nomad Emergency). The enactment of this extraordinary measure concealed the existence of a long-established institutional tradition of racism and control directed at Romanies. It was not the result of a sudden, unexpected situation which required an immediate action, as the declaration of an ‘emergency’ might imply, but rather of a precise government strategy. By providing an investigation into the interactions between Romanies, local institutions and CSOs, this book will deliver a new perspective on the Romani issue by arguing that the ‘camp’ is not only a tool for institutional control and segregation, but also for ‘resistance’, as well as a huge business in which everyone plays their part.