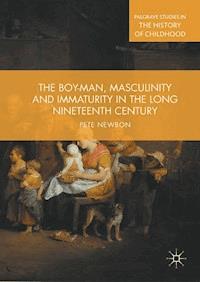 The Boy-Man, Masculinity and Immaturity in the Long Nineteenth Century ebook

This book explores the evolution of male writers marked by peculiar traits of childlike immaturity. The ‘Boy-Man’ emerged from the nexus of Rousseau’s counter-Enlightenment cultural primitivism, Sensibility’s ‘Man of Feeling’, the Chattertonian poet maudit, and the Romantic idealisation of childhood. The Romantic era saw the proliferation of boy-men, who congregated around such metropolitan institutions as The London Magazine. These included John Keats, Leigh Hunt, Charles Lamb, Hartley Coleridge, Thomas De Quincey and Thomas Hood. In the period of the French Revolution, terms of childishness were used against such writers as Wordsworth, Keats, Hunt and Lamb as a tool of political satire. Yet boy-men writers conversely used their amphibian child-adult literary personae to critique the masculinist ideologies of their era. However, the growing cultural and political conservatism of the nineteenth century, and the emergence of a canon of serious literature, inculcated the relegation of the boy-men from the republic of letters.