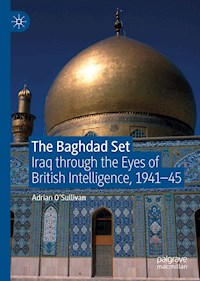 This book provides the first ever intelligence history of Iraq from 1941 to 1945, and is the third and final volume of a trilogy on regional intelligence and counterintelligence operations that includes Nazi Secret Warfare in Occupied Persia (Iran) (2014), and Espionage and Counterintelligence in Occupied Persia (Iran) (2015). This account of covert operations in Iraq during the Second World War is based on archival documents, diaries, and memoirs, interspersed with descriptions of all kinds of clandestine activity, and contextualized with analysis showing the significance of what happened regionally in terms of the greater war. After outlining the circumstances of the rise and fall of the fascist Gaylani regime, Adrian O’Sullivan examines the activities of the Allied secret services (CICI, SOE, SIS, and OSS) in Iraq, and the Axis initiatives planned or mounted against them. O'Sullivan emphasizes the social nature of human intelligence work and introduces the reader to a number of interesting, talented personalities who performed secret roles in Iraq, including the distinguished author Dame Freya Stark.