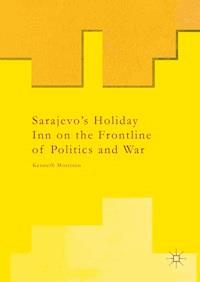 Sarajevo’s Holiday Inn on the Frontline of Politics and War charts the rich history of the city’s famous Holiday Inn hotel. Describing in detail the tumultuous events that took place within its walls and in its immediate environs, this book explores the opening of the building in advance of the 1984 Winter Olympics through the early 1990s when the hotel was utilized by political elites through to the siege of Sarajevo, when the hotel became the main base for foreign correspondents. Kenneth Morrison draws upon a plethora of primary and secondary sources, and includes extensive interviews with many participants in the drama that was played out within the confines of the hotel, contextualizing the case of the Holiday Inn by analyzing how hotels are utilized in times of conflict.