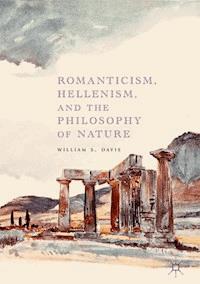 Romanticism, Hellenism, and the Philosophy of Nature ebook

This book investigates intersections between the philosophy of nature and Hellenism in British and German Romanticism, focusing primarily on five central literary/philosophical figures: Friedrich Schelling, Friedrich Hölderlin, Johann Wolfgang von Goethe, Percy Shelley, and Lord Byron. Near the end of the eighteenth century, poets and thinkers reinvented Greece as a site of aesthetic and ontological wholeness, a move that corresponded with a refiguring of nature as a dynamically interconnected web in which each part is linked to the living whole. This vision of a vibrant materiality that allows us to become “one with all that lives,” along with a Romantic version of Hellenism that wished to reassemble the broken fragments of an imaginary Greece as both site and symbol of this all-unity, functioned as a two-pronged response to subjective anxiety that arose in the wake of Kant and Fichte. The result is a form of resistance to an idealism that appeared to leave little room for a world of beauty, love, and nature beyond the self.