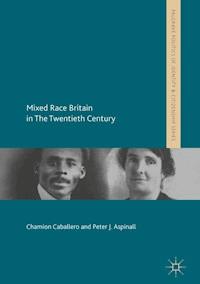 This book explores the overlooked history of racial mixing in Britain during the course of the twentieth century, a period in which there was considerable and influential public debate on the meanings and implications of intimately crossing racial boundaries.

Based on research that formed the foundations of the British television series Mixed Britannia, the authors draw on a range of firsthand accounts and archival material to compare ‘official’ accounts of racial mixing and mixedness with those told by mixed race people, couples and families themselves.

Mixed Race Britain in The Twentieth Century shows that alongside the more familiarly recognised experiences of social bigotry and racial prejudice there can also be glimpsed constant threads of tolerance, acceptance, inclusion and ‘ordinariness’. It presents a more complex and multifaceted history of mixed race Britain than is typically assumed, one that adds to the growing picture of the longstanding diversity and difference that is, and always has been, an ordinary and everyday feature of British life.