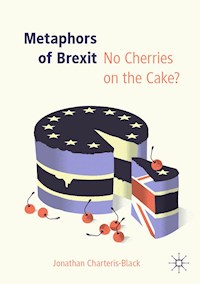 121,66 zł
How were social media posts, scripted speeches, traditional news media and political cartoons used and understood during the Brexit campaign? What phrases and metaphors were key during and after the 2016 Brexit referendum? How far did the Remain and Leave campaigns rely on metaphor to engage with supporters in communicating their political positions? These questions, and many others, can be answered only through a systematic analysis of the actual language used in relation to Brexit by the different parties involved. By drawing on a range of data sources and types of communication, and presenting them as 'frames' through which individuals can attempt to understand the world, the author provides the first book-length examination of the Metaphors of Brexit. This book takes a detailed look at the rhetorical language behind one of the major political events of the era, and it will be of interest to students and scholars of linguistics and political science, as well as anyone with a special interest in metaphor, rhetoric, Brexit, or political communication more broadly.