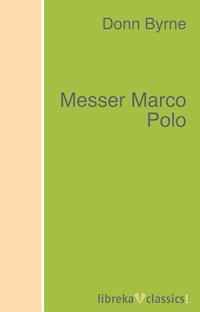 Messer Marco Polo by Donn Byrne libreka classics – These are classics of literary history, reissued and made available to a wide audience. Immerse yourself in well-known and popular titles!

A NOTE ON THE AUTHOR OF MESSER MARCO POLO

So Celtic in feeling and atmosphere are the stories of Donn Byrne that many of his devotees have come to believe that he never lived anywhere but in Ireland. Actually, Donn Byrne was born in New York City. Shortly after his birth, however, his parents took him back to the land of his forefathers. There he was educated and came to know the people of whom he wrote so magically. At Dublin University his love for the Irish language and for a good fight won him many prizes, first as a writer in Gaelic and second as the University's lightweight boxing champion. After continuing his studies at the Sorbonne and the University of Leipzig, he returned to the United States, where, in 1911, he married and established a home in Brooklyn Heights. He earned his living, while trying to write short stories, as an editor of dictionaries. Soon his tales began to attract attention and he added to his collection of boxing prizes many others won in short-story contests. When MESSER MARCO POLO appeared in 1921 his reputation in the literary world was firmly established. Thereafter, whatever he wrote was hailed enthusiastically by his ever-growing public, until 1928, when his tragic death in an automobile accident cut short the career of one of America's best-loved story-tellers.

The message came to me, at the second check of the hunt, that a countryman and a clansman needed me. The ground was heavy, the day raw, and it was a drag, too fast for fun and too tame for sport. So I blessed the countryman and the clansman, and turned my back on the field.

But when they told me his name, I all but fell from the saddle.

But he wasn't dead. He was in New York. He was traveling from the craigs of Ulster to his grandson, who had an orange-grove on the Indian River, in Florida. He wasn't dead. And I said to myself with impatience, "Must every man born ninety years ago be dead?"

"But this is a damned thing," I thought, "to be saddled with a man over ninety years old. To have to act as GARDE-MALADE at my age! Why couldn't he have stayed and died at home? Sure, one of these days he will die, as we all die, and the ghost of him will never be content on the sluggish river, by the mossy trees, where the blue herons and the white cranes and the great gray pelicans fly. It will be going back, I know, to the booming surf and the red-berried rowan-trees and the barking eagles of Antrim. To die out of Ulster, when one can die in Ulster, there is a gey foolish thing..."

But the harsh logic of Ulster left me, and the soft mood of Ulster came on me as I remembered him, and I going into the town on the train. And the late winter grass, of Westchester, spare, scrofulous; the jerry-built bungalows; the lines of uncomely linen; the blatant advertising boards—all the unbeauty of it passed away, and I was again in the Antrim glens. There was the soft purple of the Irish Channel, and there the soft, dim outline of Scotland. There was the herring school silver in the sun, and I could see it from the crags where the surf boomed like a drum. And underfoot was the springy heather, the belled and purple heather...

And there came to me again the vision of the old man's thatched farmhouse when the moon was up and the bats were out, and the winds of the County Antrim came bellying down the glens... The turf fire burned on the hearth, now red, now yellow, and there was the golden light of lamps, and Malachi of the Long Glen was reciting some poem of Blind Raftery's, or the lament of Pierre Ronsard for Mary, Queen of Scots:

There is a ribbon from my only love in my pocket deep, And the women of Europe they could not cure my grief, alas! I am done with you until a narrow coffin be made for me. And until the grass shall grow after that up through my heart!

And I suddenly discovered on the rumbling train that apart from the hurling and the foot-ball and the jumping of horses, what life I remembered of Ulster was bound up in Malachi Campbell of the Long Glen...

A very strange old man, hardy as a blackthorn, immense, bowed shoulders, the face of some old hawk of the mountains, hair white and plentiful as some old cardinal's. All his kinsfolk were dead except for one granddaughter... And he had become a tradition in the glens... It was said he had been an ecclesiastical student abroad, in Valladolid...and that he had forsaken that life. And in France he had been a tutor in the family of MacMahon, roi d' Irlande...and somewhere he had married, and his wife had died and left him money...and he had come back to Antrim... He had been in the Papal Zouaves, and fought also in the American Civil War... A strange old figure who knew Greek and Latin as well as most professors, and who had never forgotten his Gaelic...

Antrim will ever color my own writing. My Fifth Avenue will have something in it of the heather glen. My people will have always a phrase, a thought, a flash of Scots-Irish mysticism, and for that I must either thank or blame Malachi Campbell of the Long Glen. The stories I heard, and I young, were not of Little Rollo and Sir Walter Scott's, but the horrible tale of the Naked Hangman, who goes through the Valleys on Midsummer's Eve; of Dermot, and Granye of the Bright Breasts; of the Cattle Raid of Maeve, Queen of Connacht; of the old age of Cuchulain in the Island of Skye; grisly, homely stories, such as yon of the ghostly foot-ballers of Cushendun, whose ball is a skull, and whose goal is the portals of a ruined graveyard; strange religious poems, like the Dialogue of Death and the Sinner:

Do thugainn loistin do gach deoraidh treith-lag— I used to give lodging to every poor wanderer; Food and drink to him I would see in want, His proper payment to the man requesting reckoning, Och! Is not Jesus hard if he condemns me!

All these stories, of all these people he told, had the unreal, shimmering quality of that mirage that is seen from Portrush cliffs, a glittering city in a golden desert, surrounded by a strange sea mist. All these songs, all these words he spoke, were native, had the same tang as the turf smoke, the Gaelic quality that is in dark lakes on mountains summits, in plovers nests amid the heather... And to remember them now in New York, to see him...

Fifteen years had changed him but little: little more tremor and slowness in the walk, a bow to the great shoulders, an eye that flashed like a knife.

"And what do you think of New York, Malachi?"

"I was here before, your honor will remember. I fought at the Wilderness."

I forbore asking him what change he had found. I saw his quivering nostrils.

In a few days he would proceed south, when he had orientated himself after the days of shipboard.