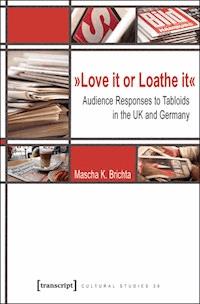 »Love it or Loathe it« ebook

Popular newspapers like the British »The Sun« and the German »Bild« regularly invite controversy over their morals and methods, power and responsibility, political and social impact. At best, their reporting is rejected as trivial, vulgar and tasteless; at worst, it is deemed hazardous to the workings of democratic society. Yet, the papers are able to attract large audiences, and contribute significantly to the daily lives of millions of readers. This book looks at popular newspapers from an audience point of view. Examining the crucial relationship between news and entertainment, it provides timely empirical evidence for the values tabloids really have for readers and modern day Britain and Germany. Contradicting common myths and stereotypes, the book calls for fresh perspectives on the popular media and their audiences. With a foreword by Peter Dahlgren, Lund University, Sweden.