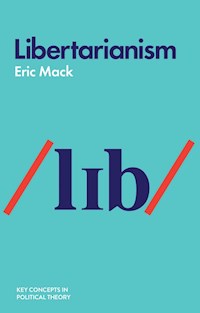 The essence of Libertarianism is the view that coercive political institutions, such as the state, are justified only insofar as they function to protect each person's liberty to pursue their own goals and well-being in their own way. Libertarians accordingly argue that any attempt to enforce top-down concepts of social justice or economic equality are fundamentally misconceived. In this book, leading expert Eric Mack provides a rigorous and clear account of the philosophical principles of Libertarianism. He offers accounts of three distinctive schools of libertarian thought, which he labels the natural rights approach, the cooperation to mutual advantage approach, and the indirect consequentialist approach. After examining the historical roots of these approaches in the thought of figures such as John Locke and David Hume, he provides illuminating accounts of the foundational arguments and the theories of economic justice offered by Robert Nozick and F.A. Hayek. He then examines a range of other debates, such as those surrounding the nature of the minimal state and those between critics and defenders of Libertarianism. This book will be essential reading for anyone interested in political philosophy, political ideologies and the nature of liberty and state authority, from students and scholars to general readers.