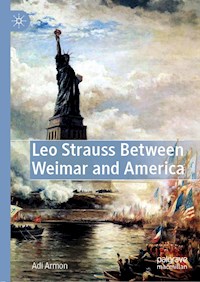 This is the first book-length examination of the impact Leo Strauss’ immigration to the United States had on this thinking.  Adi Armon weaves together a close reading of unpublished seminars Strauss taught at the University of Chicago in the 1950s and 1960s with an interpretation of his later works, all of which were of course written against the backdrop of the Cold War. First, the book describes the intellectual environment that shaped the young Strauss’ worldview in the Weimar Republic, tracing those aspects of his thought that changed and others that remained consistent up until his immigration to America. Armon then goes on to explore the centrality of Karl Marx to Strauss’s intellectual biography. By analyzing an unpublished seminar Strauss taught with Joseph Cropsey at the University of Chicago in 1960, Armon shows how Strauss’ fragmentary, partial engagement with Marx in writing obscured the important role that Marxism actually played as an intellectual challenge to his later political thinking.  Finally, the book explores the manifestations of Straussian doctrine in postwar America through reading Strauss’ The City and Man (1964) as a representative of his political teaching.