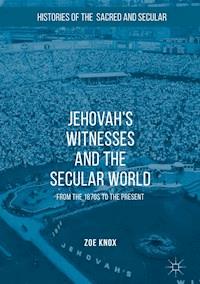 This book examines the historic tensions between Jehovah’s Witnesses and government authorities, civic organisations, established churches and the broader public. Witnesses originated in the 1870s as small, loose-knit groups calling themselves Bible Students. Today, there are some eight million Witnesses worldwide, all actively engaged in evangelism under the direction of the Watch Tower Society. The author analyses issues that have brought them global visibility and even notoriety, including political neutrality, public ministry, blood transfusion, and anti-ecumenism. It also explores anti-Witness discourse, from media portrayals of the community as marginal and exotic to the anti-cult movement.  Focusing on varied historical, ideological and national contexts, the book argues that Witnesses have had a defining influence on conceptions of religious tolerance in the modern world.