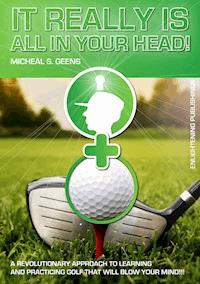 It Really Is All in Your Head! ebook

This e-book offers a revolutionary approach to learning and practicing golf, supported by scientific findings in the fields of psychology and neurology. Though its principles can be applied to all technical sports, golfers are likely to benefit most from it. It also shows that most people have the ability to become high level golfers and why that is so.

ALL IN YOUR HEAD!

OF LEARNING AND PRACTICING GOLF

THAT WILL BLOW YOUR MIND!

Micheal S. Geens was born on January 25th, 1973 in Belgium. At first glance, his life seemed pretty ordinary, even dull. Though he liked all kinds of physical activities, he also loved to put his mind at work. At one point, he even developed a strong ‘reading addiction’.

It became soon clear, that he was able to master almost anything he wanted, whether it was intellectual in nature, or physical.

By the age of 24, he spoke 6 languages, played 3 musical instruments (the piano, the violin and the Great Highland Bagpipe) at above average level, and was quite good at several sports, such as skiing, ice-skating, bowling, rock-climbing, gymnastics, and even some martial arts.

Throughout his activities, it soon became clear that he usually needed less effort, and improved faster, than most of the other students and practitioners. After reading this e-book, you will understand why!

Unfortunately, he also had a rebellious mind, and he just didn’t fit in the classical education system, which is the main reason he never even tried to obtain a higher degree, despite possessing enough knowledge to fill a small encyclopedia! Being rather an autodidact, he always cared more for broad, personal development, than for obtaining degrees.

For 14 years, he worked as a police officer and a security agent, but decided to make a change in career, which eventually brought him to Thailand as a tour guide.It was in this beautiful country, that he came in contact with the game of golf, which finally led him to write this E-book.

Over the last 3 to 4 decades, we have seen quite some changes in the way people practice sports like athletics, cycling, boxing etc.

Golf, however, is one of those “technical” sports, where very little seems to have changed in the way people learn and practice it.

And yet, certain scientific findings suggest that there are far more effective ways to learn this technical sport (and others like it), than what the vast majority of golfers is currently doing.

It is often said that, in order to excel in golf, you need to be very talented, start at a very young age, and practice hard for many, many years.

I hate to disagree!

Let me tell you something about talent:

That is, if we define “talent” in the way it is commonly understood: an individual characteristic that cannot be explained, and which gives its owner an unsurpassable advantage over most other people, thus creating a huge difference in achievable level.