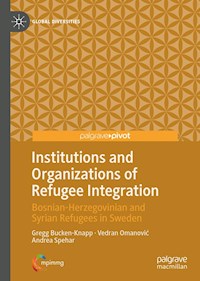 This book examines the integration experiences of refugees to Sweden from Bosnia and Herzegovina (1992-1995), and more recently from Syria (2014-2018) - two of the largest-scale refugee movements in Europe for the last thirty years.

It focuses on refugees’ interactions with key institutions of integration including language training, civic orientation, validation of previous educational experience, organizations and multiple labour market initiatives targeting refugees. Drawing on interviews with the refugees themselves, it offers a nuanced analysis of how the institutions of integration operate on a daily basis, and the effects they have on the lives of those who take part in them. The authors’ comparative approach highlights the particularities of each refugee movement while also revealing developments and persistent issues within institutions of integration in the intervening years between the Bosnian-Herzegovinian and Syrian conflicts.

Its conclusion, which situates the Swedish case within the broader European context, demonstrates the wider significance of this timely study. It will provide a valuable resource for policymakers in addition to students and scholars of migration studies, social policy, and public policy and business administration.