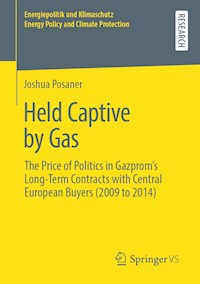 416,56 zł
Gas makes or breaks economies, as shown by the effects of the 2009 Ukraine/Russia gas supply crisis. Joshua Posaner looks at four case study countries in Central and Eastern Europe. He examines the interdependence between the domestic political structure of a gas import-dependent country and the price it paid for imports up to 2014, using the level of reliance on the dominant supplier as an indicator. The more dependent a country is on a single supplier, the more it pays for its supplies. The author aims to explain why capitals prioritize energy security and balance their import portfolios differently, while taking a new angle on the European gas system. He offers a timely investigation into an oft-reported subject, with Russia’s perceived “energy weapon” and themes of “energy dependence” weighing heavily on European political discourse.