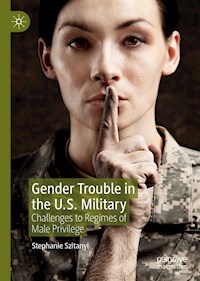 This book investigates challenges to the U.S. military’s gender regime of hetero-male privilege. Examining a broad set of discursive maneuvers in a series of cases as focal points—integration of open homosexuality, the end of the combat ban on women, and the epidemic nature of military sexual assault within its units—Stephanie Szitanyi examines the contemporary link between gender and military service in the United States, and comprehensively analyzes forms of gendering produced by the military as an institution. Using feminist interpretivist methods to analyze an impressive combination of visual, textual, archival, and cultural materials, the book argues that despite policy changes since 2013 that may be positioned as explicit episodes of degendering, military officials have simultaneously moved to counteract them and reinforce the institution’s gender regime of hetero-male privilege. Importantly, these (re)gendering processes continue to prioritize certain forms of service and sacrifice, through which a specific version of masculinity—the masculine warrior—is continuously promoted, preserved, and cemented.