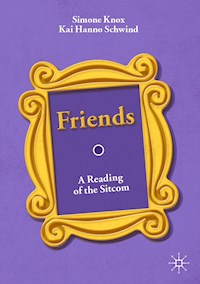 This book offers a long overdue, extensive study of one of the most beloved television shows: Friends. Why has this sitcom become the seminal success that it is? And how does it continue to engage viewers around the world a quarter century after its first broadcast? Featuring original interviews with key creative personnel (including co-creator Marta Kauffman and executive producer Kevin S. Bright), the book provides answers by identifying a strategy of intimacy that informs Friends’ use of humour, performance, style and set design. The authors provide fascinating analyses of some of the most well-remembered scenes—the one where Ross can’t get his leather pants back on, and Ross and Rachel’s break-up, to name just a couple—and reflect on how and why A-list guest performances sometimes fell short of the standards set by the ensemble cast. Also considered are the iconic look of Monica’s apartment as well as the programme’s much discussed politics of representation and the critical backlash it has received in recent years. An exploration of Joey, the infamous spin-off, and several attempts to adapt Friends’ successful formula across the globe, round out the discussion, with insights into mistranslated jokes and much more. For students, scholars, creative industry practitioners and fans alike, this is a compelling read that lets us glimpse behind the scenes of what has become a cultural phenomenon and semi-permanent fixture in many of our homes.