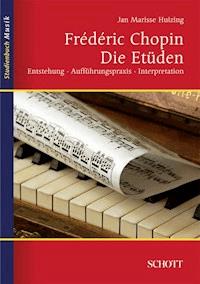 The Chopin Etudes are without doubt one of the highlights of piano literature - they are essential in achieving a masterful technique and full of musical ideas. The present e-book edition illustrates the etudes in a historical context, based on an excursus on Chopin's piano methodology and a thorough comparison of the musical texts: from the original manuscripts to the most recent urtext editions. It deals with questions about genesis, style, interpretation and playing technique as well as with the history and development of the piano. This casts an entirely new light not only on the etudes themselves but also on the interpretation of other works by Chopin. With its numerous examples, facsimile reproductions and a discography, this e-book is a must-have for both lovers of Chopin's music and advanced amateur and professional pianists.

Translated from the German by Matthias Müller

Without limiting the rights under copyright reserved above, no part of this publication may be reproduced, stored in or introduced into a retrieval system, or transmitted, in any form or by any means (electronic, mechanical, photocopying, recording, or otherwise), without the prior written permission of both the copyright owner and the above publisher of this book.

1 The piano etude in Chopin’s time

4 Are there models for Chopin’s Etudes?

Alfred Cortot [on the Chopin etudes]:

‘Bold undertakings to which the musician without virtuosity is just as unable to find access as the virtuoso without musicality.’

The first thing a book about Chopin’s Etudes brings to mind would be something in the way of a piano methodology; a personal, methodic approach to the (technical) challenges of these works. This is however not the primary focus of my book. Instead it deals with another, no less intriguing aspect: the Etudes in a historical perspective. While there are a number of publications that concern themselves with specific methods of technically coming to grips with the Etudes1, these masterpieces have in the course of the history of piano playing rarely been examined from a historical perspective. However, the growing interest for historical performance practice need not limit itself to pre-Romantic music; it certainly makes sense to apply this approach also to the Chopin Etudes that have been of key importance for the development of piano playing.

Chopin began work on his Etudes Op. 10 while still in Poland when he was not yet twenty, followed these up in Paris with the twelve Etudes Op. 25, finally writing three smaller Etudes a few years later.

When his Op. 10 was published in 1833 it caused a veritable sensation among his contemporaries, and together with his Op. 25 which was published in 1837 it was regarded as the summit of the pianistic parnassus. This is still the case today. Essential for acquiring a virtuoso piano technique, Chopin’s Etudes stand alone in that here technique is wedded in an unparalleled way to a wealth of musical ideas.

This book sheds light on a variety of aspects that are connected to historical performance practice: keys, manners of playing, tempo / character and metronome indications, pedaling and variants are put into perspective with regard to Chopin’s piano writing and the instruments he used. Attention is also given to a number of Urtext and historical editions as well as to the way the musical image of a work has changed over time. The book concludes with an overview of the many recordings of these Etudes that have been made over the years and an appendix presenting the different systems of piano action in the instruments used in Chopin’s time and after.

This is also the place to thank those who have helped me in writing this book. First and foremost my heartfelt thanks go to the eminent Polish pianist and scholar Jan Ekier with whom I had the privilege of studying in Warsaw in the 1960s and who shared his great love for and knowledge of Chopin’s works with me, which meant a great deal to me. Moreover, Ekier encouraged me in many conversations to write this book. Sadly, in August 2014, a few weeks before his 101 birthday, he passed away.

Also important was the exchange of ideas with the Swiss Chopin expert Jean-Jacques Eigeldinger, who graciously gave me permission to quote comments of Chopin’s pupils that he collected in his book Chopin: pianist and teacher as seen by his pupils.2

After my book was published in 1996 in Dutch by ‘de Toorts’ in Haarlem, my friend and colleague the German pianist Detlef Kraus, who suddenly passed away in 2008, offered to translate it into German. This resulted in a revised edition published by Schott in 2009, and here I am very grateful to Paul Badura-Skoda, pianist and editor of the Wiener Urtext edition of the Chopin etudes, for letting me avail myself of his critical eye.

And now this English version has given me the opportunity to make some further amendments and include additional material, in particular in chapters 2, 4, 5, 7 and 8.

My special thanks go to translator and musician Matthias Müller for undertaking the task of creating the English text for this ebook which led to an intensive and inspiring collaboration.3

In addition I would like to thank the Bibliothèque National in Paris for the permission to reproduce a number of facsimiles, and to Hanna Wróblewska-Straus, the former curator of the Chopin Institute ‘Towarzystwo im. Fryderyka Chopina’ (TiFC) in Warsaw, who made it possible for me to study Chopin’s original manuscripts and provided photographic material. I also owe thanks to the ‘Österreichische Nationalbibliothek’ in Vienna for furnishing me with an important facsimile, as well as to the publishers Henle, Wiener Urtext, Breitkopf & Härtel and Schott for their kind permission to reproduce examples taken from their editions.

Finally, I hope this book will shed some light on the musical contents and background of Chopin’s Etudes and contribute to arriving at inspired interpretations of these masterpieces.

A portrait of Chopin in a rare lithograph. Drawing by Cäcilie Brandt after a portrait by Vigneron (lithograph, by A. Kneisel, Leipzig; private collection). The portrait was made in 1833, the year the Etudes Op. 10 were published.

1 The piano etude in Chopin’s time

‘But wherefore the descriptive words! They are all models of bold, indwelling, creative force, truly poetic creations. […]’

When Chopin composed his Etudes Op. 10 – around 1830 – tutors specially written for the piano were being published only for a couple of decades. Most of the material published in this field until around 1800 usually concerned keyboard instruments in general: harpsichord, organ and clavichord, even though the authors sometimes revealed a preference for a particular instrument.4 Interest for these older keyboard instruments gradually diminished, particularly in Germany, due to the emergence of the more recent ‘fortepiano’, invented 1698 by Florentin Bartolomeo Cristofori (1655-1731)5, until finally keyboard music was exclusively written for this instrument, besides the organ.6 One of the most important methods available at the end of the 18th century was the Klavierschule (1789) by Daniel Gottlob Türk (1756-1813). It was conceived for performers on the clavichord – listing its required qualities and special features of touch – as well as the harpsichord, organ and the fortepiano. It dealt with general music theory, performance practice and the correct application of embellishments. Technical matters were rarely addressed. In this, piano tutors very much reflected the way how music was typically understood at the time: as a unity of technical and musical content. The same also applies to the music of this period written for teaching purposes. It was part of a long tradition which included, in the field of keyboard music, Bach’s Inventions and Scarlatti’s sonatas – he called them Essercizi – as perhaps the most outstanding works of their kind.