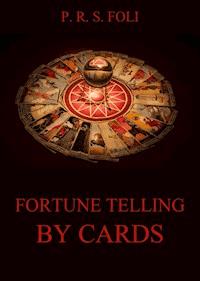 Chapter I How we got our Pack of Cards

Chapter IV The Signification of Quartettes, Triplets, and Pairs

Chapter V  What the Cards can Tell of the Past, the Present, and the Future

Chapter XII How They Tell Fortunes in Italy

Chapter XIV Signification of Suits in the Master Method

"THIS goddess Fortune frustrates, single-handed, the plans of a hundred learned men." In this saying the Latin author has given us the key to all the restless striving to search out the Unknown and the Unknowable which marks our own age, just as it has marked previous periods in history which we are apt to look back upon as being but little removed from the dark ages. Of all the methods by which men and women seek to penetrate into the mysteries of Fate and Futurity, Cartomancy is one that can claim the distinction of having swayed the human mind from prehistoric times right down to this twentieth century of ours. It may be that this book will fall into the hands of those who agree with the words of L’Estrange: "There needs no more than impudence on the one side and a superstitious credulity on the other to the setting up of a Fortune-teller." This attitude of cynical superiority is sometimes genuine, but in many cases if we could read what lies beneath the surface we should find that it is but a cloak worn to conceal a lurking fear, an almost irritated condition of mind, born of a halfconfessed faith in the power at which it is so easy to scoff. There is a vein of superstition in every human heart, and many men who have played a great part in the world's history have not been ashamed to seek help from occultists, when the tangle of life seemed too involved for them to unravel with the ordinary means at their disposal. The pages of history are full of the penalties meted out by kings and rulers to those who were accused of working evil spells upon them. It needs but to mention the names of Wallenstein, Murat, King of Naples; Bernadotte, afterwards King of Sweden; and the merciless Robespierre, as types of a vast number over whom the fascinations of Astrology and Cartomancy, which are so closely allied, have cast their witching spell. Pope treats the cards as sentient entities:

"The king, unseen, Lurked in her hand and mourned his captive queen."

While in another passage he says:

"Soon as she spreads her cards th’ aerial guard Descend and sit on each important card."

In the following pages we have given information that will, we hope, afford interest and amusement to many. We have not dwelt on the gift of prophecy, or on the power of second sight claimed by apostles of the occult. We would in no case obtrude the subject of Cartomancy upon the notice of those whose susceptibilities would be wounded, or whose sense of right and wrong would be outraged by the practice, and we have ventured to speak a word of warning to the morbidly minded. We give this method of Fortune-telling for what it is worth. It may be either a pastime seasoned with a flavour of mystery, a study in the weird ways of coincidence, or a test of skill quickened by intuition. We would have all our readers amused and interested, but none saddened or enslaved by it.

Chapter I How we got our Pack of Cards

Divination by cards, therefore, is of great antiquity and of world-wide popularity. Formerly it was combined with a knowledge of astrology; but now it is considered sufficient to follow the general rules laid down by one or two famous cartomancers, and to rely on intuition and experience for details. Necessity for Sympathy. Any one with the slightest knowledge of occultism is aware that sympathy with the inquirer or subject is essential. It is true that cold reason tells us that the cards are pieces of pasteboard and nothing more, and that it is the height of absurdity to expect any revelation; yet, in dealing with them, human sympathy may discern something of our perplexities, and all unconsciously set our feet on the right path. Value of Cartomancy. In the following pages there are several methods of divination by cards. Any one observing the rules can learn the signification of the cards, and while a study of the combinations they resolve into in the hands of different people will always provide a fund of amusement, it may also—in all seriousness I say it—inspire hope in the place of despair, assuage sorrow, and send the inquirer away comforted; surely no insignificant result.

Two Systems. THERE are two separate systems of explaining the cards individually: one which makes use of the whole pack of fifty-two cards, and another which only employs thirty-two, throwing out the plain cards under seven of each suit. The English Method. The former plan is sometimes spoken of as the English method, and in it we do not find mention of reversed cards bearing a different meaning from those which come out in the ordinary way. This is probably to be explained by the fact that the larger number in use affords sufficient shades of meaning, and the task of remembering one hundred and four significations would be too heavy for many minds. The Foreign. In the latter system, which is more distinctly traceable to foreign sources, we get the signification of each card modified, or even contradicted, by its position being upright or the reverse. The following definitions apply to the use of the whole pack, and have been worked up from both ancient and modern sources of information. It must always be borne in mind that the reading of the cards has come down to us through many ages, has been passed on to us through count less hands and in varied tongues. Cartomancy has travelled from the East to the West, from the South to the North, and its secrets have been, for the most part, jealously preserved by oral tradition among its weird and fascinating votaries. Significations of the Cards. The following definitions are based upon one of the oldest authorities dealing with the subject, and have been amplified by some of the more modern meanings now in vogue,

Ace.—An important card, whose meaning is affected by its environment. Among hearts it implies love, friendship, and affection; with diamonds, money and news of distant friends; with clubs, festivities, and social or domestic rejoicing; with, spades, disagreements, misunderstandings, contention, or misfortune; individually, it stands for the house.

Knave.—Not endowed with any sex. Sometimes taken as Cupid; also as the best friend of the inquirer, or as a fair person's thoughts. The cards on either side of the knave are indicative of the good or bad nature of its intentions.

Ten.—A sign of good fortune. It implies a good heart, happiness, and the prospect of a large family. It counteracts bad cards and confirms good ones in its vicinity.

Nine.—The wish card. It is the sign of riches, and of high social position accompanied by influence and esteem. It may be affected by the neighbourhood of bad cards.

Eight.—The pleasures of the table, convivial society. Another meaning implies love and marriage.

Seven.—A faithless, inconstant friend who may prove an enemy.