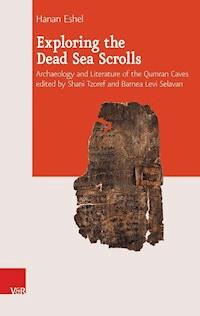 Among the most prominent hallmarks of the late Prof. Hanan Eshel (1958–2010) were his generosity, passion, and integrative approach. The eighteen essays in this volume were selected by Prof. Eshel shortly before his untimely death, to be printed as a collection aimed at contextualizing the textual finds of the Dead Sea Scrolls within their archaeological settings and within the contours of contemporary scholarship.The Qumran texts that stand at the center of these articles are correlated with archaeological and geographic information and with a variety of textual sources including epigraphic evidence and, especially, the Hebrew Bible, Josephus, and rabbinic texts. The essays are organized according to the provenance of the discovered material, with sections devoted to the Damascus Documentand the scrolls from Caves 1, 3, 4, and 11, as well as a final more general chapter.Half of the essays have been previously published in English, while the other half have been translated from Hebrew here for the first time. The book includes essays that have been co-authored with Esther Eshel, Shlomit Kendi-Harel, Zeev Safrai, and John Strugnell.