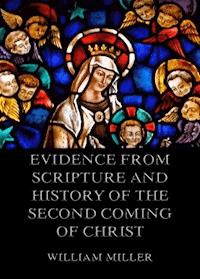 In presenting these Lectures to the public, the writer is only complying with the solicitations of some of his friends, who have requested that his views on the Prophecies of Daniel and John might be made public. The reader is therefore requested to give the subject a careful and candid perusal, and compare every part with the standard of Divine Truth; for if the explanation the writer has given to the scriptures under consideration should prove correct, the reader will readily perceive that it concerns us all, and becomes doubly important to us, because we live on the eve of one of the most important events ever revealed to man by the wisdom of God--the judgment of the great day.

Evidence from Scripture and History of the Second Coming of Christ, W. Miller

TITUS ii. 13. Looking for that blessed hope, and glorious appearing of the great God, and our Savior Jesus Christ.

REV. xx. 6. Blessed and holy is he that hath part in the first resurrection; on such the second death hath no power; but they shall be priests of God and of Christ, and shall reign with him a thousand years.