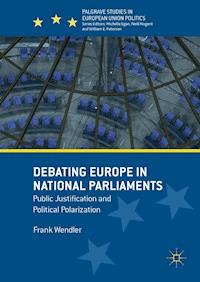 This book investigates recent public debates about the European Union (EU) in national parliaments, which have become the primary arena for public debate about the EU. Responding to claims about a politicization of European governance, the author investigates the link between two dimensions of debate – the discursive justification and party political contestation of decision-making in the EU. Embedded in a comparison between the legislatures of four Member States (Austria, France, Germany, and the United Kingdom), the main finding of the book is that generalizable links can be identified between the use of different argumentative frames and patterns of party political polarization. These insights help to clarify the context conditions in which patterns of left/right and government/opposition politics are replaced by more atypical forms of polarization. In a comparative perspective, the author demonstrates that party political factors are a more relevant factor for variation than thematic or country-specific cultural or institutional factors. Case studies include debates on EU Treaty Reform, the Eurozone crisis, and EU enlargement.