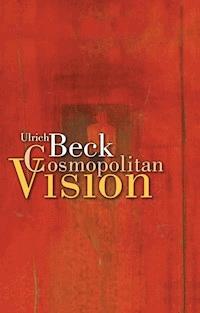 In this new book, Ulrich Beck develops his now widely used conceptsof second modernity, risk society and reflexive sociology into aradical new sociological analysis of the cosmopolitan implicationsof globalization. Beck draws extensively on empirical andtheoretical analyses of such phenomena as migration, war andterror, as well as a range of literary and historical works, toweave a rich discursive web in which analytical, critical andmethodological themes intertwine effortlessly. Contrasting a 'Cosmopolitan Vision' or'outlook' sharpened by awareness of the transformativeand transgressive impacts of globalization with the 'nationaloutlook' neurotically fixated on the familiar referencepoints of a world of nations-states-borders, sovereignty, exclusiveidentities-Beck shows how even opponents of globalization andcosmopolitanism are trapped by the logic of reflexive modernizationinto promoting the very processes they are opposing. A persistent theme running through the book is the attempt torecover an authentically European tradition of cosmopolitanopenness to otherness and tolerance of difference. What Europeneeds, Beck argues, is the courage to unite forms of life whichhave grown out of language, skin colour, nationality or religionwith awareness that, in a radically insecure world, all are equaland everyone is different.

What is enlightenment? To have the courage to make use of one’s cosmopolitan vision and to acknowledge one’s multiple identities – to combine forms of life founded on language, skin colour, nationality or religion with the awareness that, in a radically insecure world, all are equal and everyone is different.

The right of Ulrich Beck to be identified as Author of this Work has been asserted in accordance with the UK Copyright, Designs and Patents Act 1988.

First published in 2006 by Polity Press

For further information on Polity, visit our website: www.polity.co.uk

1 Global Sense, Sense of Boundarylessness: The Distinction between Philosophical and Social Scientific Cosmopolitanism

2 The Truth of Others: On the Cosmopolitan Treatment of Difference – Distinctions, Misunderstandings, Paradoxes

3 Cosmopolitan Society and its Adversaries

5 War is Peace: On Postnational War

Cosmopolitan identities, or the logic of inclusive differentiation

On the distinction between globalization and cosmopolitanization

1 Global Sense, Sense of Boundarylessness: The Distinction between Philosophical and Social Scientific Cosmopolitanism

1 What is novel about the cosmopolitan outlook?

2 Critique of the national outlook and methodological nationalism

2.1 Principles and errors of methodological nationalism

3 Towards a cosmopolitan social science, or the new grammar of the social and the political

3.1 Risk-cosmopolitanism: global public opinion as a side effect

3.3 The invisibility of global inequality

4.2 The human rights regime between perpetual peace and perpetual war

2 The Truth of Others: On the Cosmopolitan Treatment of Difference – Distinctions, Misunderstandings, Paradoxes

1 On the social treatment of difference

1.1 The two faces of universalism

1.2 The two faces of relativism

1.3 The two faces of nationalism

1.4 The two faces of ethnicism

2 What is ‘realistic’ about realistic cosmopolitanism? Whereas universalism, relativism, and nationalism are based on the either/or principle, cosmopolitanism rests on the both/and principle

2.1 Neither Huntington nor Fukuyama: cosmopolitanism means what is excluded by both positions: the affirmation of the other as both different and the same

2.3 The reality test of cosmopolitanism consists in the common defence against evils

2.4 Is ethnic cosmopolitanism possible? The historicization of difference

2.6 The category of ‘transnationality’ is the contrary of all concepts of social order, and therein lies its political, but also its analytical, provocation

3 Cosmopolitan Society and its Adversaries

2 The three conceptions of globalization research in the social sciences

2.2 The new metaphor of ‘liquidity’

3 More on the politics of perspectives

3.1 Forms and causes of conflicts

3.2 Forms and causes of integration

4 Qualitative research: the global can be investigated locally – the analysis of banal cosmopolitanization

1 The average migrant: translegal, authorized, unacknowledged cosmopolitanism from below

4.1 Cosmopolitanization begets its own resistance

4.2 Everyone else may be able to shut their eyes to the cosmopolitanization of reality, but not social scientists

4.3 The prophets of anti-cosmopolitanism are forced to operate on the terrain of cosmopolitanization – this is what makes them so dangerous

4.4 Europe is the source of the Enlightenment and the counter-Enlightenment; modern anti-cosmopolitanism is part of the European tradition

4.5 Anti-cosmopolitanism suffers from a clinical loss of reality: cosmopolitanization does not disappear simply because we refuse to acknowledge its existence

5 The cosmopolitanization of international relations

5.1 The question of legitimacy

5.2 The neonationalism of the international

5.3 Military humanism, or the paradox of the threat of war

5 War is Peace: On Postnational War

3.1 The human rights regime becomes a counter-concept that affirms the divided world in its diversity and creates new hope for possibilities of action

3.2 The logic of law and treaties is fundamentally two-faced in world domestic politics: it civilizes states while simultaneously liberating them from the national constraints on power and violence

3.3 Human rights empower the powerless within states and expose powerless states to the military aggression of powerful states

3.4 The economy of war-for-peace, or why the world has not yet been consumed by a military conflagration

4 War is peace: war against terror

4.1 The war in Afghanistan and the Iraq War were unprecedented because they were the first wars in human history against a culturally generated risk

4.2 Terrorism unfolds its political power in the interaction between catastrophe and danger

4.3 The new master–slave dialectic of state and terror: on the political construction of the danger of terror

4.4 The danger of terror and its consequences: the demolition of social structures

5 Utopian perplexity: the new global order in the conflict of perspectives

5.1 The national outlook and the preventive irrelevance of the new world order

5.2 The new world order in the national-global outlook: Americanism versus internationalism

5.3 Self-critical cosmopolitanism, or the fear of utopia

1 The European Union is not a club for Christians, a transcendental community of common descent

3 Thinking of Europe in national terms not only fails to understand the reality and future of Europe; it also (re)produces the self-obstructions that have become characteristic of political action in Europe

4 Cosmopolitan realism is not a utopia but a reality: it captures the experience of the Western alliance and the European Union and extends it for the age of global dangers

This book developed out of an intense conversation and exchange of ideas with Daniel Levy and Natan Sznaider, whose numerous promptings I have accepted and who consistently provided very valuable comments on drafts. Thus this book also presents results of our joint research project (funded by the Deutsche Forschungsgesellschaft) with a specific focus on ‘Reflexive Modernization’ (see, in addition, Beck, Levy and Sznaider 2004). This research project itself exemplifies the topic of the book: Daniel Levy teaches sociology at the State University of New York, Stonybrook, Natan Sznaider at the Academic College of Tel Aviv and I in Munich and London. Without this international network of exchange and cooperation, which also includes Michael Pollak, a sociologist and editor in New York, and numerous colleagues at the London School of Economics and Political Science, this book would not have been possible. In addition, Edgar Grande, Boris Holzer and Angelika Poferl have carefully read individual chapters and made highly stimulating comments on them, for which I offer them my sincere thanks. Finally, this book benefited greatly from what Elisabeth Beck-Gernsheim was writing concurrently in her book Wir und die Anderen. The larger research project of which this book is a part will be documented in the volume Entgrenzung und Entscheidung, edited by myself and Christoph Lau.

My work has been generously supported by the Volkswagen-Stiftung, for which I am very grateful.

What makes the cosmopolitan outlook ‘cosmopolitan’? What do we mean by ‘cosmopolitanism’? This word evokes at once the most marvellous and the most terrible histories.

The greatest and most productive controversies of the European Enlightenment are connected with it, but they have long since been forgotten. Some, such as Heinrich Laube in the middle of the nineteenth century, invoked the therapeutic value of the fatherland against the allegedly excessive demands of cosmopolitanism: ‘Patriotism is one-sided and petty, but it is practical, useful, joyous and comforting; cosmopolitanism is splendid, large, but for a human being almost too large; the idea is beautiful, but the result in this life is inner anguish’ (1973: 88). Cosmopolitanism is in the end just a beautiful idea: ‘Nowadays in our concern for humanity we tend to lose sight of human beings; and in this time of conflagrations, cannons and fiery speeches this is abject. The idea is a beautiful thing, too large for almost everybody, and it remains a mere idea. If it does not take on a concrete individual form, it might as well have never existed’ (ibid.: 131).

Heinrich Heine, by contrast, who regarded himself as an embodiment of cosmopolitanism, prophesied around the same time ‘that in the end this will become the universal conviction among Europeans, and . . . it has a greater future than our German chauvinists, these mere mortals who belong to the past’ (1997: 710). He criticized German patriotism, which in his view involved ‘a narrowing of the heart, which contracts like leather in the cold, and hatred of all things foreign – a desire no longer to be a world citizen or a European but merely a narrow German.’ He excoriated ‘the shabby, coarse, unwashed opposition to a sentiment which is the most splendid and sacred thing Germany has produced, that is, opposition to the humanity, the universal brotherhood of man, the cosmopolitanism to which our great minds, Lessing, Herder, Schiller, Goethe, Jean Paul and all educated people in Germany have always paid homage’ (ibid.: 379). (These quotations, like many others in this introduction, are taken from Thielking 2000.)

Nowadays there is no point in arguing over whether patriotism, although practical, is too petty, whereas cosmopolitanism, by contrast, is splendid, but cold and unliveable. The important fact now is that the human condition has itself become cosmopolitan. To illustrate this thesis we need only highlight the fact that the most recent avatar in the genealogy of global risks, the threat of terror, also knows no borders. The same is true of the protest against the war in Iraq. For the first time a war was treated as an event in global domestic politics, with the whole of humanity participating simultaneously through the mass media, even as it threatened to shatter the Atlantic alliance. More generally, the paradox that resistance against globalization itself produces political globalization has been apparent for some time. The globalization of politics, economic relations, law, culture, and communication and interaction networks spurs controversy; indeed, the shock generated by global risks continually gives rise to worldwide political publics.