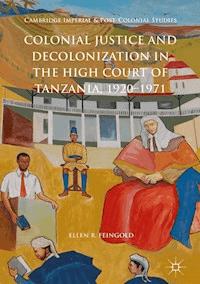 Colonial Justice and Decolonization in the High Court of Tanzania, 1920-1971 ebook

This book is the first study of the development and decolonization of a British colonial high court in Africa. It traces the history of the High Court of Tanzania from its establishment in 1920 to the end of its institutional process of decolonization in 1971. This process involved disentangling the High Court from colonial state structures and imperial systems that were built on racial inequality while simultaneously increasing the independence of the judiciary and application of British judicial principles.  Feingold weaves together the rich history of the Court with a discussion of its judges – both as members of the British Colonial Legal Service and as individuals – to explore the impacts and intersections of imperial policies, national politics, and individual initiative. Colonial Justice and Decolonization in the High Court of Tanzania is a powerful reminder of the crucial roles played by common law courts in the operation and legitimization of both colonial and post-colonial states.