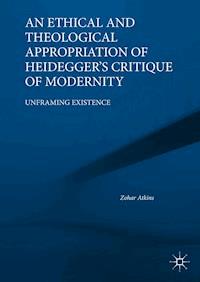 This book is at once a deeply learned and original reading of Heidegger and a primary text in its own right. It demonstrates the relevance of Heidegger’s thought in responding to the moral and religious challenges of 21st century existence. It shows that Heidegger’s project can be defended against many criticisms once its existential character is taken seriously. What emerges is a powerful exercise in thinking, not about Heidegger, but with and against him. As such, Atkins engages Heidegger as a means of advancing a defense of spirituality in the modern world that holds spirituality itself accountable for its lapses into the mundane. Addressing the most influential figures in recent Continental philosophy, such as Emmanuel Levinas and Theodor W. Adorno, this is a work that will be of timely use to philosophers, theologians, artists, and seekers.