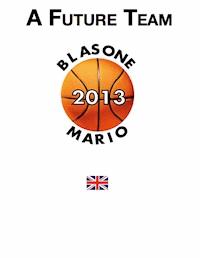 Coach Blasone reaches with this book a beautiful balance between knowledge and experience. Any show of culture even if he could do it easily.He designs many offensive anddefensive drills with clear ideas. He looks to be teaching on the floor like running a practice,with good advices in order to have a good job from his players.

A former player himself, school teacher, he began his coaching career back in 1972. Blasone began making a name for himself in Italy’s youth programs.

He coached professional teams of top division in Udine, Verona and again in Udine 2010. He has won more medals than anyone else in Europe at youth level.

Blasone’s career moved in a different direction in 1998 when he became head coach of the Egyptian National Team. With Blasone at the helm, Egypt won gold medals at 1999 Pan- Arab Games and at the African Games.

He came back to Egypt coaching Gezira Club in Cairo. He has won with this team the Cup of Egypt and Egyptian Championship of season 2005/2006.

Along with his vast coaching experience, Blasone has also led “one man” coaching clinics in 43 different countries.

He can lecture in English, French, Spanish and... Italian. He wrote four books, for the Italian Federation and F.I.B.A. This book is projected for future basketball.

Mario Blasone is our most succesful coach with our youth program National Teams, but it remains mainly a teacher, an educator.

Blasone contributed to build many players at national level, not only onto the court but mainly outside of court.

Coach Blasone reaches with this book a beautiful balance between knowledge and experience. Any show of culture even if he could do it easily. He designs many offensive and defensive drills with clear ideas. He looks to be teaching on the floor like running a practice with good advice in order to have a good job from his players.

• 2 vs 2 cooperation on baseline

3. MY OFFENSE AGAINST ZONES

• My Offense against zone defence

• Special warm up drills for guards

• Warm up drills for Big Guys

• We want a quick shot

• Penetrator can have different solutions

• Last but not least

• We want to change the idea of defense – We want to attack opponents.

• We teach defense every practice for 50% of time.

• Everybody can learn defensive techniques, but you must hammer your players every day.

• Man playing the ball handler is the most important on defense

1. One arm distance, bothering ball (Down up!);

5. Target is basketball, not the body of our opponents;

6. Arms work; one forcing on th weak hand, another hand bothering an inside pass;

7. We must force our opponent where we want and we are responsible for 4 meters (two dribbles). Players not able to do this job will be sitting on the bench with me!

8 “SMALLER” is the most important rule: the defender (even if bigger) becomes 30 cm smaller then the ball handler!!

Even if we teach defense we don’t forget offence. (diagr. 1) wing goes low, up, and out, and shows “ten fingers”.

Hand off, but bouncing ball onto floor and we start 1 on 1 side (diagr. 3)

Defensive player must hold 4 meters. Don’t make stupid fouls like grabbing, holding, pushing! Let him shoot. If a basket occurs, make an in bounds pass to the left player and convert to full court. (diagr. 4)

Receiver shows 10 fingers and the defender must fly with the ball and run full court (2vs1 defender). Drill ends with a made basket!

Players on lines MUST STAY on court because they create traffic.

Same drill on the left side of the floor. (diagr. 5)

Why first on the right and then on the left? “Think about it!

IMPORTANT> Force on the weak side (hand) or force on the baseline; we use the same rules!!!

Swing on the left, screen on the right (diagr. 7) and back in the middle.