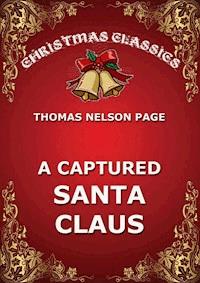 A Captured Santa Claus is a story of the Civil War in which little children are the real heroes and heroines. 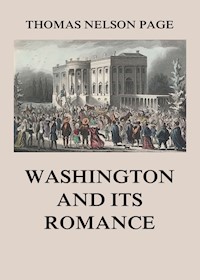 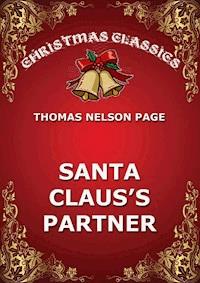 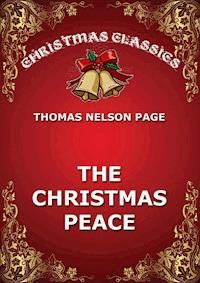 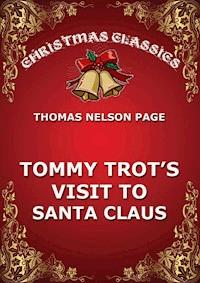 I - Christmas At Holly Hill

IV - The Boys Learn Something Of War

I - Christmas At Holly Hill

They went to sleep the night before Christmas—or rather they went to bed, for sleep was long far from their bright eyes—with delightful expectations and thrills along their backs, and with little squeakings and gurglings, like so many little white mice, and if Santa Claus had not always been so very prompt in disappearing up the chimney before daybreak he must certainly have been caught. For by the time the chickens were crowing in the morning there would be an answering twitter through the house, and with a patter of little feet and subdued laughter small, white-clad figures would steal through the dim light of dusky rooms and cold passages, opening doors with sudden bursts, and shouting "Christmas gift!" into darkened chambers, at still sleeping elders. Then they would scurry away in the gray light to rake open the hickory embers and revel in the exploration of their bulging, overcrowded stockings. Not Columbus was to be envied when those discoveries were being made. What was a new world to those treasures! The thrill of the new jack-knife remains after forty years—it had four blades, each worth a province. Envy Columbus? Perish the thought!

Such was Christmas morning at Holly Hill in the old times before the war—those times of Memory and Romance.

Thus it was that at Christmas, 1863, when the blockading lines were drawn close and there were no new toys to be had for love or money, there were much disappointment and some murmurs at Holly Hill. The children had never really felt the war until then, though their father, Major Stafford, had been off, first with his company and then with his regiment, since April, 1861. War was on the whole a pleasant experience to the boys—so many strangers came by. Battles were so interesting, and there was a bare chance of their seeing one, in which Bob was to lead a charge and capture the commanding General.

But when Christmas came and there were no presents, no "real" presents, war was realized. It was a terrible thing. From Mrs. Stafford down to little tot Evelyn there was an absence of the merriment which Christmas always brought with it. The children's mother had done all she could to collect such presents as were within her reach, but the youngsters were much too sharp not to know that the presents were "just fixed up"; and when they were all gathered around the fire in their mother's chamber that Christmas morning, looking over their presents, their little faces wore an expression of pathetic disappointment.

"I don't think much of this Christmas," announced freckled Ran, with characteristic gravity, looking down on his poor presents with an air of contempt. "A hatchet, a lot of old nails, and a hare-trap aren't much."

Mrs. Stafford smiled, but the smile soon died away into an expression of sadness.

"I too have to do without my Christmas gift," she said. "Your father wrote me that he hoped to spend Christmas with us, and he has not come. He has been ordered over to the Potomac."

"Never mind; he may come yet," said Bob encouragingly. "He always does what he says he's going to do." (Bob always was encouraging. That was why he was "Old Bob.") "An axe was just the thing I wanted, mamma," said he, shouldering his new possession proudly and striking the attitude of a woodman striding off. "Now I can make an abatis."

Mrs. Stafford's face lit up again. He was a sturdy boy, with wide-open eyes and a good mouth.

"And a hatchet was what I wanted," admitted Ran, affected by the example. "Besides, there are a lot of nails—now I can make my own hare-traps."

"An' I like a broked knife," asserted Charlie, stoutly, falling valiantly into the general movement, while Evelyn pushed her long hair out of her eyes, and hugged her patched-up baby, declaring:

"I love my dolly, and I love Santa Tlaus, an' I love my papa," at which her mother took the little midget to her bosom, broken doll and all, and hid her face in her tangled curls.

The end of that Christmas was better than the beginning. Major Stafford justified Bob's confidence. The holiday was not quite over when one evening Major Stafford galloped up to the gate through the mist, his black horse, Ajax, splashed with mud to his ear-tips. He had ridden him seventy miles that day to keep that tryst. The Major soon heard all about the little ones' disappointment at not receiving any new presents.

"Santa Tlaus didn' tum this Trismas, but he's tummin' next Trismas," said Evelyn, looking wisely up at him, that evening, from the rug, where she was vainly trying to make her doll's head stick on her broken shoulders.

"And why did he not come this Christmas, Miss Wisdom?" laughed her father, touching her caressingly with the toe of his boot.

"Tause the Yankees wouldn't let him," said she, gravely, holding her doll up and looking at it pensively, her head on one side.

"And why, then, should he come next year?"

"Taus God's goin' to make him." She turned the mutilated baby around and examined it gravely, with her shining head still set on the other side.

Her husband asked the child: