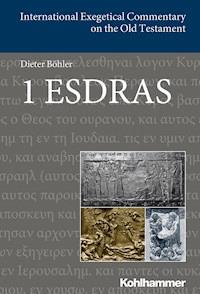 1 Esdras is an alternative version of the book of Ezra-Nehemiah in the Septuagint. Most Eastern Orthodox churches accord the book canonical status. This is the first commentary on 1 Esdras based on the critical text of the Göttingen Septuagint edition. It understands 1 Esdras not simply as a fragment of the Chronistic history or as merely a compilation, but rather as a coherent narrative. Its interpretation as a literary work and the reconstruction of its composition take into account both the historical backgrounds of the narrative setting of the Persian period and the historical location of the composition in the Hasmonaean period. 1 Esdras is currently enjoying a period of renewed attention in scholarship. Its relationship to Ezra-Nehemiah is seen as a prime example of literary-historical developments in Israel.

Top: Panel from a four-part relief on the “Black Obelisk of Shalmaneser III” (859–824 BCE) depicting the Israelite king Jehu (845–817 BCE; 2 Kings 9f) paying obeisance to the Assyrian “King of Kings.” The vassal has thrown himself to the ground in front of his overlord. Royal servants are standing behind the Assyrian king whereas Assyrian officers are standing behind Jehu. The remaining picture panels portray thirteen Israelite tribute bearers carrying heavy and precious gifts.

Bottom left: One of ten reliefs on the bronze doors that constitute the eastern portal (the so-called “Gates of Paradise”) of the Baptistery of St. John of Florence, created 1424–1452 by Lorenzo Ghiberti (c. 1378–1455). Detail from the picture “Adam and Eve”; in the center is the creation of Eve: “And the rib that the Lord God had taken from the man he made into a woman and brought her to the man.” (Gen 2:22)

Bottom right: Detail of the Menorah in front of the Knesset in Jerusalem, created by Benno Elkan (1877–1960): Ezra reads the Law of Moses to the assembled nation (Neh 8). The bronze Menorah was created in London in 1956 and in the same year was given by the British as a gift to the State of Israel. A total of 29 reliefs portray scenes from the Hebrew bible and the history of the Jewish people.

W. Kohlhammer bears no responsibility for the accuracy, legality or content of any external website that is linked or cited, or for that of subsequent links.

1 Esdras is an alternative version of the book of Ezra-Nehemiah in the Septuagint. Most Eastern Orthodox churches accord the book canonical status. This is the first commentary on 1 Esdras based on the critical text of the Göttingen Septuagint edition. It understands 1 Esdras not simply as a fragment of the Chronistic history or as merely a compilation, but rather as a coherent narrative. Its interpretation as a literary work and the reconstruction of its composition take into account both the historical backgrounds of the narrative setting of the Persian period and the historical location of the composition in the Hasmonaean period. 1 Esdras is currently enjoying a period of renewed attention in scholarship. Its relationship to Ezra-Nehemiah is seen as a prime example of literary-historical developments in Israel.

The International Exegetical Commentary on the Old Testament (IECOT) offers a multi-perspectival interpretation of the books of the Old Testament to a broad, international audience of scholars, laypeople and pastors. Biblical commentaries too often reflect the fragmented character of contemporary biblical scholarship, where different geographical or methodological sub-groups of scholars pursue specific methodologies and/or theories with little engagement of alternative approaches. This series, published in English and German editions, brings together editors and authors from North America, Europe, and Israel with multiple exegetical perspectives.

From the outset the goal has been to publish a series that was “international, ecumenical and contemporary.” The international character is reflected in the composition of an editorial board with members from six countries and commentators representing a yet broader diversity of scholarly contexts.

The ecumenical dimension is reflected in at least two ways. First, both the editorial board and the list of authors includes scholars with a variety of religious perspectives, both Christian and Jewish. Second, the commentary series not only includes volumes on books in the Jewish Tanach/Protestant Old Testament, but also other books recognized as canonical parts of the Old Testament by diverse Christian confessions (thus including the Deuterocanonical Old Testament books).

When it comes to “contemporary,” one central distinguishing feature of this series is its attempt to bring together two broad families of perspectives in analysis of biblical books, perspectives often described as “synchronic” and “diachronic” and all too often understood as incompatible with each other. Historically, diachronic studies arose in Europe, while some of the better known early synchronic studies originated in North America and Israel. Nevertheless, historical studies have continued to be pursued around the world, and focused synchronic work has been done in an ever greater variety of settings. Building on these developments, we aim in this series to bring synchronic and diachronic methods into closer alignment, allowing these approaches to work in a complementary and mutually-informative rather than antagonistic manner.

Since these terms are used in varying ways within biblical studies, it makes sense to specify how they are understood in this series. Within IECOT we understand “synchronic” to embrace a variety of types of study of a biblical text in one given stage of its development, particularly its final stage(s) of development in existing manuscripts. “Synchronic” studies embrace non-historical narratological, reader-response and other approaches along with historically-informed exegesis of a particular stage of a biblical text. In contrast, we understand “diachronic” to embrace the full variety of modes of study of a biblical text over time.

This diachronic analysis may include use of manuscript evidence (where available) to identify documented pre-stages of a biblical text, judicious use of clues within the biblical text to reconstruct its formation over time, and also an examination of the ways in which a biblical text may be in dialogue with earlier biblical (and non-biblical) motifs, traditions, themes, etc. In other words, diachronic study focuses on what might be termed a “depth dimension” of a given text – how a text (and its parts) has journeyed over time up to its present form, making the text part of a broader history of traditions, motifs and/or prior compositions. Synchronic analysis focuses on a particular moment (or moments) of that journey, with a particular focus on the final, canonized form (or forms) of the text. Together they represent, in our view, complementary ways of building a textual interpretation.

Of course, each biblical book is different, and each author or team of authors has different ideas of how to incorporate these perspectives into the commentary. The authors will present their ideas in the introduction to each volume. In addition, each author or team of authors will highlight specific contemporary methodological and hermeneutical perspectives – e.g. gender-critical, liberation-theological, reception-historical, social-historical – appropriate to their own strengths and to the biblical book being interpreted. The result, we hope and expect, will be a series of volumes that display a range of ways that various methodologies and discourses can be integrated into the interpretation of the diverse books of the Old Testament.

The present commentary on 1 Esdras is the first to offer an exegesis of this deuterocanonical book on the basis of the critical text by Robert Hanhart in the Göttingen edition of the Septuagint. The commentary by Michael F. Bird in the Septuagint Commentary Series 2012 is based on the text of Codex Vaticanus, and the focus of the exegesis in that recent publication is the embedding of 1 Esdras in ancient Greek literature and culture. Regrettably, it could not be considered in the preparation of this commentary.

Unlike previous exegetical works, this commentary does not regard 1 Esdras as a fragment of the Chronistic historical work, but as a systematic and complete narrative; this work is the first to treat the book as such and to apply narratological methods to its interpretation. At the same time, the anti-Hasmonean history behind the development of the narrative, closely bound up with its pro-Hasmonean sister-version in Ezra-Nehemiah, will now for the first time be reconstructed in accordance with the text-critical study I offered in 1997.

The substance of the commentary was developed during a research semester at the University of Tübingen in 2012. I am grateful to my Tübingen colleagues for their friendly reception and to the University for providing me with an ideal setting in which to do my work.

I thank my own faculty at the Philosophisch-Theologische Hochschule Sankt Georgen, Frankfurt am Main, for providing me with that research semester, and my confrere and colleague, Professor Emeritus Norbert Lohfink, SJ, for his careful reading of the manuscript. I am grateful to the English translator Linda Maloney for her efficient and excellent work, as well as for her excellent spirit of cooperation. Thanks also go out to my present assistant Timm Schreiner for his diverse labors in creating an English version of the German original. Working with the series editors, Professors Walter Dietrich and Gary Knoppers, and with Florian Specker, my editor at Kohlhammer, was at all times frictionless and pleasurable. I offer them all my thanks.

I dedicate the commentary to my Doktorvater, Professor Adrian Schenker, who initiated me in the mysteries of textual criticism and was the first to acquaint me with the problems and questions presented by 1 Esdras.

Act One: The Jerusalem Temple under Josiah and the Last Kings of ­Judah (1 Esdras 1)

1And Josias kept the passover (feast) for his Lorda in Jerusalem and slaughtered the paschal lamb on the 14 day of the first month, for which he placed the priests in order according to their daily services, in their vestments, in the temple of the Lord.