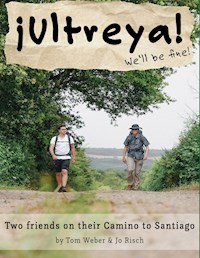 'Is this going to work out?' No other question was asked as often as this one when it came to the project 'Tom & Jo's Camino for Charity 2019'. And you could see why: a Buddhist writer and a Catholic hedonist going on a pilgrimage? Through this book you can relive this peculiar journey from Porto to Santiago de Compostela along the Portuguese Coastal Way in an authentic and engaging manner. See the adventure through Tom's original journal notes, countless pictures, comments and Jo's favourite parts of each day. A charming testimony of what pilgrimage can mean to a generation born into a materialistic and turbo-capitalist society.