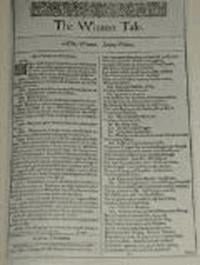 The Winter's Tale is a play by William Shakespeare, first published in the First Folio in 1623. Although it was listed as a comedy when it first appeared, some modern editors have relabeled the play a romance. Some critics, among them W. W. Lawrence (Lawrence, 9-13), consider it to be one of Shakespeare's "problem plays", because the first three acts are filled with intense psychological drama, while the last two acts are comedic and supply a happy ending.