Excerpt: "In all the wide expanse of ocean that surrounded that island, there was nothing visible save one small, solitary speck on the far-off horizon. It might have been mistaken for a seagull, but it was in reality a raft—a mass of spars and planks rudely bound together with ropes. A boat’s mast rose from the centre of it, on which hung a rag of sail, and a small red flag drooped motionless from its summit. There were a few casks on the highest part of the raft, but no living soul was visible. Nevertheless, it was not without tenants. In a hollow between two of the spars, under the shadow of one of the casks, lay the form of a man. The canvas trousers, cotton shirt, blue jacket, and open necktie, bespoke him a sailor, but it seemed as though there were nothing left save the dead body of the unfortunate tar, so pale and thin and ghastly were his features. A terrier dog lay beside him, so shrunken that it looked like a mere scrap of door-matting. Both man and dog were apparently dead, but they were not so in reality, for, after lying about an hour quite motionless, the man slowly opened his eyes. 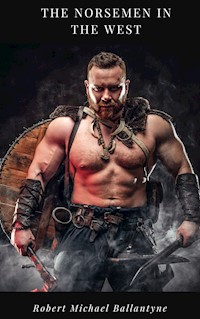 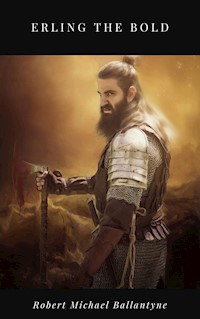