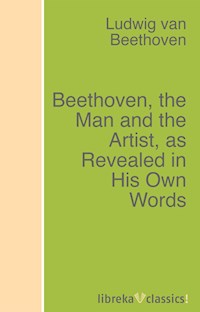 Beethoven, the Man and the Artist, as Revealed in His Own Words ebook

Beethoven, the Man and the Artist, as Revealed in His Own Words. Translation of: Beethoven im eigenen Wort libreka classics – These are classics of literary history, reissued and made available to a wide audience. Immerse yourself in well-known and popular titles! 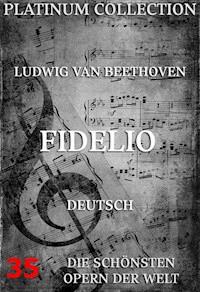 Titel: Beethoven, the Man and the Artist, as Revealed in His Own Words

BEETHOVEN: THE MAN AND THE ARTIST,

AS REVEALED IN HIS OWN WORDS

This edition of "Beethoven: the Man and the Artist, as Revealed in his own Words," was translated into English and published in 1905 by B.W. Hubsch. It was also republished unabridged by Dover Publications, Inc., in a 1964 edition, ISBN 0-486-21261-0.

ON HIS OWN WORKS

ON ART AND ARTISTS

ON HIS OWN DISPOSITION AND CHARACTER

Ludwig van Beethoven (1770-1827) is widely considered to be one of the pre-eminent classical music figures of the Western world. This German musical genius created numerous works that are firmly entrenched in the repertoire. Except for a weakness in composing vocal and operatic music (to which he himself admitted, notwithstanding a few vocal works like the opera "Fidelio" and the song "Adelaide,"), Beethoven had complete mastery of the artform. He left his stamp in 9 symphonies, 5 piano concertos, 10 violin sonatas, 32 piano sonatas, numerous string quartets and dozens of other key works. Many of his works are ingeniously imaginative and innovative, such as his 3rd symphony (the "Eroica"), his 9th Violin Sonata (the "Kreutzer"), his "Waldstein" piano sonata, his 4th and 5th piano concertos, or his "Grosse Fugue" for string quartet. (Of course, each of Beethoven's works adds its own unique detail to Beethoven's grand musical paradigm.)

It is difficult to sum up briefly what his musical works represent or symbolize, since taken together they encompass a vast system of thought. Generally, however, those who apprehend his music sense that it reflects their own personal yearnings and sufferings. It egoistically, and always intelligently, "discusses" with its listener his or her feelings in the wake of personal failure and personal triumph, from the lowest depths of despair to the highest heights of happy or triumphant fulfillment. In his music, he represents the feelings felt by those attempting to achieve their goals within their societies, whether they are competing for love, status, money, power, mates and/or any other things individuals feel naturally inclined to attempt to acquire.

In a thematic sense, Beethoven does not promote anarchist ideas. The listener cannot, in listening to Beethoven's music, apprehend ideas which, if applied, would compromise the welfare of his society. The music is thus "civically responsible," as is the music of Bach or Mozart. For Beethoven, the society exists as a bulwark with which the individual must function in harmony, or at least not function such as to harm or destroy it. And, should the society marginalize or hurt the individual, as it often does, the individual must, according to Beethoven, humbly accept this, never considering the alternative act of attempting to harm or destroy the society in the wake of his or her personal frustrations. But, thanks to Beethoven, such an individual is provided with the means to sooth his or her misery in the wake of feeling "hurt" at the hands of society. The means is this music and the euphoric pleasure that it can provide to minds possessing the psycho-intellectual "wiring" needed to apprehend it.

Some post-World-War-II composers, such as the late, LSD-using John Cage, reject the music of Beethoven because of its predominant reliance on "beauty" as way of communicating idealized concepts. Also, since the music intimately reflects the cravings and thought-processes of the natural human mind, which in numerous ways is emotionally and intellectually irrational, the music may itself be consequently irrational.

The following book consists of brief biographical commentaries about Beethoven, each followed by sections of quotations attributed to the muse. In these quotes, Beethoven demonstrates his intense preoccupation (or obsession) with thinking artistically and intelligently, and with helping to alleviate man's suffering by providing man with musical artworks that could enlighten him, so as to become educated enough to pull himself out of his misery. He felt immediate, strong disdain at any artistic statement that was not truly intelligent and artistic, such as, in his view, the music of Rossini. Although not prudish, he had high standards when it came to marriage, and was morally against "reproductory pleasure" for its own sake, or any form of adultery. He never married. Interestingly, experimental psychologists have discovered that people who have an intense love of humanity or are preoccupied with working to serve humanity tend to have difficulty forming intimate bonds with people on a personal level.

This little book came into existence as if it were by chance. The author had devoted himself for a long time to the study of Beethoven and carefully scrutinized all manner of books, publications, manuscripts, etc., in order to derive the greatest possible information about the hero. He can say confidently that he conned every existing publication of value. His notes made during his readings grew voluminous, and also his amazement at the wealth of Beethoven's observations comparatively unknown to his admirers because hidden away, like concealed violets, in books which have been long out of print and for whose reproduction there is no urgent call. These observations are of the utmost importance for the understanding of Beethoven, in whom man and artist are inseparably united. Within the pages of this little book are included all of them which seemed to possess value, either as expressions of universal truths or as evidence of the character of Beethoven or his compositions. Beethoven is brought more directly before our knowledge by these his own words than by the diffuse books which have been written about him. For this reason the compiler has added only the necessary explanatory notes, and (on the advice of professional friends) the remarks introductory to the various subdivisions of the book. He dispensed with a biographical introduction; there are plenty of succinct biographies, which set forth the circumstances of the master's life easily to be had. Those who wish to penetrate farther into the subject would do well to read the great work by Thayer, the foundation of all Beethoven biography (in the new revision now making by Deiters), or the critical biography by Marx, as revised by Behncke. In sifting the material it was found that it fell naturally into thirteen subdivisions. In arranging the succession of utterances care was had to group related subjects. By this means unnecessary interruptions in the train of thought were avoided and interesting comparisons made possible. To this end it was important that time, place and circumstances of every word should be conscientiously set down.

Concerning the selection of material let it be said that in all cases of doubt the authenticity of every utterance was proved; Beethoven is easily recognizable in the form and contents of his sayings. Attention must be directed to two matters in particular: after considerable reflection the compiler decided to include in the collection a few quotations which Beethoven copied from books which he read. From the fact that he took the trouble to write them down, we may assume that they had a fascination for him, and were greeted with lively emotion as being admirable expressions of thoughts which had moved him. They are very few, and the fact that they are quotations is plainly indicated. By copying them into his note-books Beethoven as much as stored them away in the thesaurus of his thoughts, and so they may well have a place here. A word touching the use of the three famous letters to Bettina von Arnim, the peculiarities of which differentiate them from the entire mass of Beethoven's correspondence and compel an inquiry into their genuineness: As a correspondent Bettina von Arnim has a poor reputation since the discovery of her pretty forgery, "Goethes Briefwechsel mit einem Kinde" (Goethe's Correspondence with a Child). In this alleged "Correspondence" she made use of fragmentary material which was genuine, pieced it out with her own inventions, and even went so far as to turn into letters poems written by Goethe to her and other women. The genuineness of a poem by Beethoven to Bettina is indubitable; it will be found in the chapter entitled "Concerning Texts." Doubt was thrown on the letters immediately on their appearance in 1839.