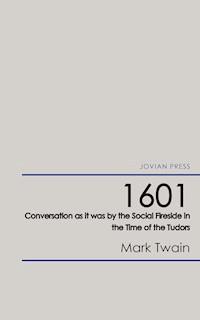 Conversation, as it was by the Social Fireside, in the Time of the Tudors. or simply 1601 is the title of a short risque squib by Mark Twain, first published anonymously in 1880, and finally acknowledged by the author in 1906. Written as an extract from the diary of one of Queen Elizabeth I's ladies-in-waiting, the pamphlet purports to record a conversation between Elizabeth and several famous writers of the day. The topics discussed are entirely scatological, notably farting and sex. 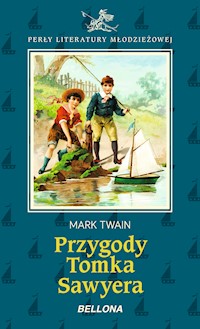 “BORN IRREVERENT,” SCRAWLED MARK TWAIN on a scratch pad, “—like all other people I have ever known or heard of—I am hoping to remain so while there are any reverent irreverences left to make fun of.” —[Holograph manuscript of Samuel L. Clemens, in the collection of the F. J. Meine]

Mark Twain was just as irreverent as he dared be, and 1601 reveals his richest expression of sovereign contempt for overstuffed language, genteel literature, and conventional idiocies. Later, when a magazine editor apostrophized, “O that we had a Rabelais!” Mark impishly and anonymously—submitted 1601; and that same editor, a praiser of Rabelais, scathingly abused it and the sender. In this episode, as in many others, Mark Twain, the “bad boy” of American literature, revealed his huge delight in blasting the shams of contemporary hypocrisy. Too, there was always the spirit of Tom Sawyer deviltry in Mark’s make-up that prompted him, as he himself boasted, to see how much holy indignation he could stir up in the world.

The correct and complete title of 1601, as first issued, was: [Date, 1601.] ‘Conversation, as it was by the Social Fireside, in the Time of the Tudors.’ For many years after its anonymous first issue in 1880, its authorship was variously conjectured and widely disputed. In Boston, William T. Ball, one of the leading theatrical critics during the late 90’s, asserted that it was originally written by an English actor (name not divulged) who gave it to him. Ball’s original, it was said, looked like a newspaper strip in the way it was printed, and may indeed have been a proof pulled in some newspaper office. In St. Louis, William Marion Reedy, editor of the St. Louis Mirror, had seen this famous tour de force circulated in the early 80’s in galley-proof form; he first learned from Eugene Field that it was from the pen of Mark Twain.

“Many people,” said Reedy, “thought the thing was done by Field and attributed, as a joke, to Mark Twain. Field had a perfect genius for that sort of thing, as many extant specimens attest, and for that sort of practical joke; but to my thinking the humor of the piece is too mellow—not hard and bright and bitter—to be Eugene Field’s.” Reedy’s opinion hits off the fundamental difference between these two great humorists; one half suspects that Reedy was thinking of Field’s French Crisis.

But Twain first claimed his bantling from the fog of anonymity in 1906, in a letter addressed to Mr. Charles Orr, librarian of Case Library, Cleveland. Said Clemens, in the course of his letter, dated July 30, 1906, from Dublin, New Hampshire:

“The title of the piece is 1601. The piece is a supposititious conversation which takes place in Queen Elizabeth’s closet in that year, between the Queen, Ben Jonson, Beaumont, Sir Walter Raleigh, the Duchess of Bilgewater, and one or two others, and is not, as John Hay mistakenly supposes, a serious effort to bring back our literature and philosophy to the sober and chaste Elizabeth’s time; if there is a decent word findable in it, it is because I overlooked it. I hasten to assure you that it is not printed in my published writings.”

The circumstances of how 1601 came to be written have since been officially revealed by Albert Bigelow Paine in ‘Mark Twain, A Bibliography’ (1912), and in the publication of Mark Twain’s Notebook (1935).

1601 was written during the summer of 1876 when the Clemens family had retreated to Quarry Farm in Elmira County, New York. Here Mrs. Clemens enjoyed relief from social obligations, the children romped over the countryside, and Mark retired to his octagonal study, which, perched high on the hill, looked out upon the valley below. It was in the famous summer of 1876, too, that Mark was putting the finishing touches to Tom Sawyer. Before the close of the same year he had already begun work on ‘The Adventures of Huckleberry Finn’, published in 1885. It is interesting to note the use of the title, the “Duke of Bilgewater,” in Huck Finn when the “Duchess of Bilgewater” had already made her appearance in 1601. Sandwiched between his two great masterpieces, Tom Sawyer and Huck Finn, the writing of 1601 was indeed a strange interlude.

During this prolific period Mark wrote many minor items, most of them rejected by Howells, and read extensively in one of his favorite books, Pepys’ Diary. Like many another writer Mark was captivated by Pepys’ style and spirit, and “he determined,” says Albert Bigelow Paine in his ‘Mark Twain, A Biography’, “to try his hand on an imaginary record of conversation and court manners of a bygone day, written in the phrase of the period. The result was ‘Fireside Conversation in the Time of Queen Elizabeth’, or as he later called it, ‘1601’. The ‘conversation’ recorded by a supposed Pepys of that period, was written with all the outspoken coarseness and nakedness of that rank day, when fireside sociabilities were limited only to the loosened fancy, vocabulary, and physical performance, and not by any bounds of convention.”

“It was written as a letter,” continues Paine, “to that robust divine, Rev. Joseph Twichell, who, unlike Howells, had no scruples about Mark’s ‘Elizabethan breadth of parlance.’”

The Rev. Joseph Twichell, Mark’s most intimate friend for over forty years, was pastor of the Asylum Hill Congregational Church of Hartford, which Mark facetiously called the “Church of the Holy Speculators,” because of its wealthy parishioners. Here Mark had first met “Joe” at a social, and their meeting ripened into a glorious, life long friendship. Twichell was a man of about Mark’s own age, a profound scholar, a devout Christian, “yet a man with an exuberant sense of humor, and a profound understanding of the frailties of mankind.” The Rev. Mr. Twichell performed the marriage ceremony for Mark Twain and solemnized the births of his children; “Joe,” his friend, counseled him on literary as well as personal matters for the remainder of Mark’s life. It is important to catch this brief glimpse of the man for whom this masterpiece was written, for without it one can not fully understand the spirit in which 1601 was written, or the keen enjoyment which Mark and “Joe” derived from it.

The story of the first issue of 1601 is one of finesse, state diplomacy, and surreptitious printing.