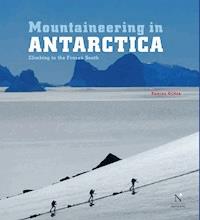 A beautiful work dedicated to mountain addicts and to amateurs who like to travel far from home!Climbing Antarctica is a unique experience. It is a dream that only few mountaineers have had the privilege to fulfill and that you can now skim, thanks to this very nice book, richly illustrated and remarkably documented.Damien Gildea will let you get be dragged into the rich history of Antarctica mountaineering adventure, from the first explorations in the 19th century until the achievements of today extreme climbers. He will lead you at the very heart of the most impressive and remote mountains of the South Pole…Discovering the incredible Antarctica Mountains, emerging from the white hugeness, will let more than one reader speechless. It is hard to figure out that we are still on Earth !In this volume you can find all the information about South Georgia.This book is an absolute must-have for all climbers and travellers!ABOUT THE AUTHORDamien Gidea is a polar mountaineer and explorer. He successfully led seven expeditions in the highest Antarctica Mountains, from 2001 to 2008. He is the author of the book entitled Antarctic Mountaineering Chronology, published in 1998, and of detailed topographical maps of the Livingston Island (2004) and Vinson Mountain (2006). His articles and photographs were published in many periodicals around the world, as the American Alpine Journal or the American magazine called Alpinist. He also led a skiing expedition to the South Pole and took part in several expeditions in the Himalayas, in Karakorum and in the Andes. When he is not exploring, Damien Gildea lives in Australia.EXCERPTStormy, rugged, windswept, formidable; all words usually associated with the island of South Georgia, and it rarely fails to live up to such descriptions. Around 170 km long, 30 km wide, overwhelmingly mountainous and heavily glaciated, the island actually has two ranges. The higher Allardyce Range runs down the centre of the island, and the lower, rockier Salvesen Range is in the southeast of the island, the two separated by Ross Pass.The BAS 1:200,000 topographical map shows ten peaks over 2000 m, with all but one of them in the eastern part of the island, but more modern surveying may prove some of these to be lower. However, for such a small island, in such a remote location, with such terrible weather, it has contributed a substantial amount of climbing action towards the history of mountaineering in Antarctica. 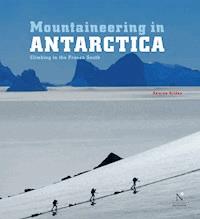 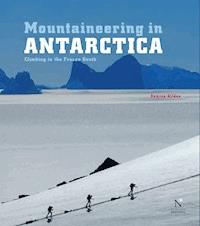 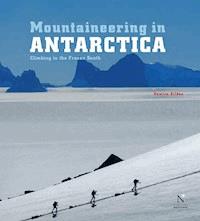 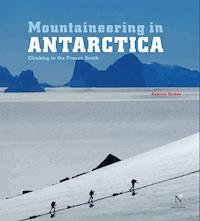 Climbing in Antarctica is a special experience that never fails to affect those fortunate enough to do it. For most of Antarctica’s human history this experience was restricted to those who worked as part of national government Antarctic programs, requiring great financial and logistical efforts. Visitors – and in Antarctica we are all visitors – were a small cog in a vast scientific and political machine. The scope and quality of work done by these programs has been incredible and continues to be so, providing us with critical insights into not only Antarctica but also our world as a whole. However, in purely mountaineering terms, the activity of such operations was understandably limited. Mountaineering merely enabled scientific work, with recreational climbing discouraged and usually unrecorded. In the following pages I hope to preserve at least some of those ascents, as often they have proven to be more significant to those involved than the official scientific record may indicate, and they are part of the rich human history of Antarctica that should be recorded for all to enjoy.

In general the earliest climbs were done on the Antarctic Peninsula, as it was the most accessible part of the continent and it remains popular to this day, the mountains set against the sea as beautiful as ever. As human activity spread to other parts of the land, scientific stations were established and they became bases for exploring any nearby mountains, most notably the vast Transantarctic Mountains from Scott and McMurdo bases on Ross Island. However, with the advent of private travel to inland Antarctica in the 1980s, other areas became popular solely for their value as climbing objectives. Thus the continent’s highest mountain, Mount Vinson in the Sentinel Range, has become a commercially viable destination on an annual basis and the stunning rock towers of Queen Maud Land are visited with some regularity. But other areas also contain interesting peaks, particularly the southern Transantarctics – home to Antarctica’s highest unclimbed mountains – and the relatively unexplored ranges of Alexander Island, too far down the Peninsula to sail to, not popular enough to fly to. Scattered around the continent are other worthwhile objectives, such as the big rock walls in the Ohio Ranges and Sarnoff Mountains, the remote peaks of Mac Robertson Land and, of course, the storm-swept giants rising out of the sea on South Georgia.

STEPHEN CHAPLIN CLIMBS HIGH ON THE WEST FACE OF MOUNT CRADDOCK, Sentinel Range, Ellsworth Mountains. Beneath, the Bender Glacier drains south into the larger Nimitz Glacier, beyond which are the smaller peaks of the Bastien Range.

No one mountain or route in Antarctica could be said to be anything greater – higher, longer, harder, steeper – than some other route or mountain on another continent. The location is the difference. There is only one Antarctica. Climbing in Antarctica is the closest that most of us will get to climbing on another planet – on Earth, but not of Earth. To walk the Vinson summit plateau is to tiptoe across the roof of a great ship adrift in an endless white sea, suspended above every other thing on the continent. You cannot walk out to a village or road, as in the Himalaya or Alaska. You can never walk home.

It would be wrong to discuss the future of the continent for Science only in the loose, emotional language of modern environmentalism, or through the selfish justifications of adventurers and sportsmen. But just as Antarctica should not be a political fiefdom for diplomats, it is more than just a giant laboratory and requires more than just science programs to ensure a safe future. We should all care about Antarctica; it is too important not to.

JED BROWN ON AN UNNAMED SUMMIT ABOVE THE EMBREE GLACIER. Behind is the dangerous northeast face of Mount Anderson, Sentinel Range, Ellsworth Mountains.

CLIMBERS AT THEIR BASE CAMP in the Orvinfjella Range, Queen Maud Land.

Climbing in Antarctica is not essential to humanity: it is a luxury. It is also a way in which we can see, understand and connect with a continent that is so important to the rest of the world. By opening up both the history and future of these faraway Antarctic mountains to a wider audience I hope that more people will come to love this place and hence care more about it.

Antarctica presents us with a challenge: to interact more responsibly with the natural environment of which we are all a part, not above. We must not damage that on which we rely for our survival, we have to make use of it without destroying it, and to share it without conflict. Our choice defines us, as will our stewardship of Antarctica.

Climbing, at its best, is about desire, passion, partnership, integrity, commitment, excellence and joy. Antarctica deserves no less.

Stormy, rugged, windswept, formidable; all words usually associated with the island of South Georgia, and it rarely fails to live up to such descriptions. Around 170km long, 30km wide, overwhelmingly mountainous and heavily glaciated, the island actually has two ranges. The higher Allardyce Range runs down the centre of the island, and the lower, rockier Salvesen Range is in the southeast of the island, the two separated by Ross Pass.

The BAS 1:200,000 topographical map shows ten peaks over 2000 m, with all but one of them in the eastern part of the island, but more modern surveying may prove some of these to be lower. However, for such a small island, in such a remote location, with such terrible weather, it has contributed a substantial amount of climbing action towards the history of mountaineering in Antarctica.