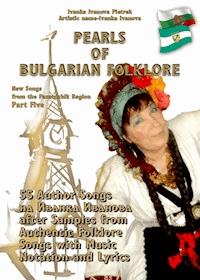 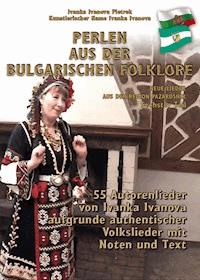 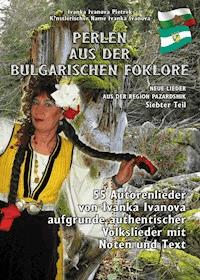 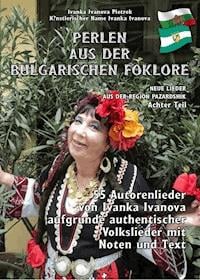 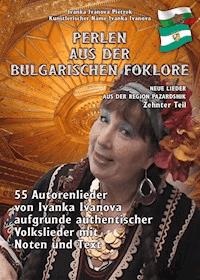 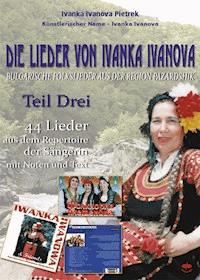 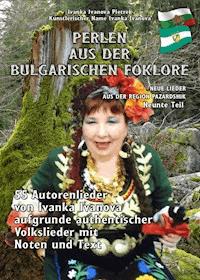 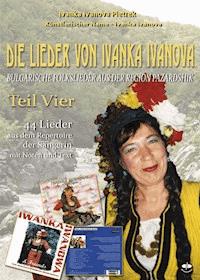 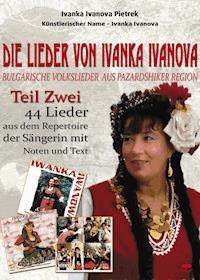 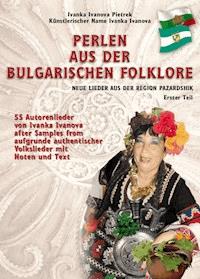 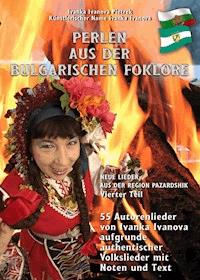 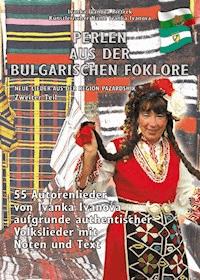 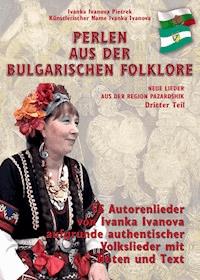 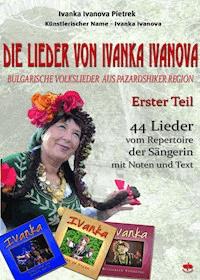 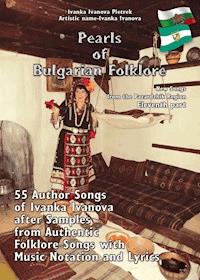 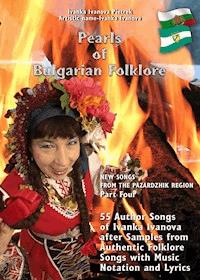 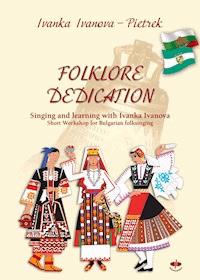 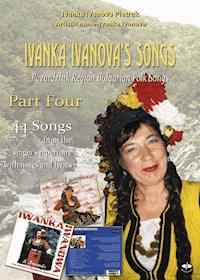 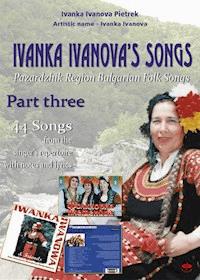 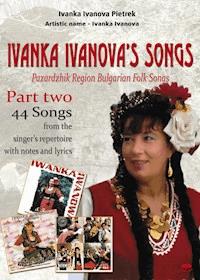 New Songs from the Pazardzhik Region

The author, composer, arranger, and editor of the electronic book “Pearls of Bulgarian Folklore” “New Songs from the Pazardzhik Region” Part Five is the folklore singer Ivanka Ivanova Pietrek, whose artistic name is Ivanka Ivanova. Her songs haven’t been published, they’re created by her after samples from authentic folk songs from the Pazardzhik region, which she has collected for years. It is known that she collected over 1000 authentic songs.

2013 – The tetralogy “The Songs of Ivanka Ivanova” – Parts One, Two, Three, and Four – in three languages, Bulgarian, German, and Englishfollows – each book with 44 Pazardzhik folk songs from her repertoire, with musical notation and lyrics.

2014 In the current e-book “Pearls of Bulgarian Folklore” “New Songs from Pazardzhik Region” – Part Five the following have been presented:

You can follow the realization of other projects of the folklore singer Ivanka Ivanova.

The final number of parts has not been settled on with a finality.

The specifics of the Pazardzhik Folklore Region

The Western part of the Thracian lowland begins from Pazardzhik town. The town is a juncture between Europe and Asia. The pause between the couplets is typical for the singing of the region. The common beats here are 2/4- Pravo horo, 11/16- Krivo horo, 7/8- ruchenitsa, 5/8- Paidushko horo, 9/8- Daichovo horo, 13/16…and mixed beats like 5/8 + 9/8- Yovino horo. The slow songs have the typical throat trembling (modulating of the sound). The songs are thematically various: harvesting, heroic, mythical, haidouk, love, songs for table, for work and working-bee.

Oh, this bird, why is it singing so early,

why is it singing so early, early before dawn,

ah, it wakes up my youngbride,

“Hey get up, get up, you young bride,

get up, get up and my horsesaddle,

because I will go very far away

very far away in the new lands.

Say, tell mewhat to buy for you,

what to buy for you from the new land,

do you want a letter or money

or you want me to come to you?“

And the bride said, said and spoke

“I do not want anything from the new lands!

Neither a letter nor money

2.Vidda was sweeping the yard

Vida was sweeping the courtyard, dear,

Vida was sweeping the courtyard,

a chicken was bustling in front of Vida, dear,

a chicken was bustling in front of Vida.

And it was saying to Vida, dear,

and it was saying to Vida:

Why are you sweeping the courtyard and singing, dear,

why are you sweeping the courtyard and singing?

Nineof my brothers have died, dear,

nine of my brothers have died!

The tenth is in his death-bed,dear,

the tenth is in his death-bed! “

She entered the coolcellars, dear,

she entered the cool cellars,

Took off her white gown, dear,

took off her white gown,

and put on long black clothes.

sram me e da ya pogledna,

3I am so angry, mother

that you got me married so young,

that you got me married so young

got me married and ruined my life.

Girls of my age, mother,

are still going out, mother, andwearing,

and I have, mother, poor me,

my male child in my arms.

My malechild in my arms

and another one, mother, in my heart.

Old mother in law is sitting in the corner,

the herdsmancomes from the upper road.

The herdsman comes from the upper road,

I am ashamed to look at her,

I feel guilty to get her

to bring the herds home.