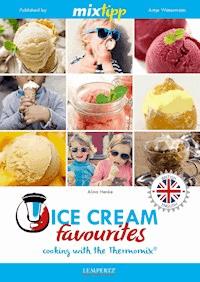 Do you want some ice cream? Sure! Time is always right for ice cream, whether in spring, summer, autumn, or winter, whether at temperatures of + 30°C and higher or far below freezing. A Frozen Latte on a shiny summer day, a consoling Chocolate Shocker for a broken heart or a fancy specialty like Alina's Ginger Dream - with this compilation of recipes of our author Alina Henke and your Thermomix create your favourite ice cream as if by magic! This compilation includes recipes starting from refreshing parfaits, tasty sorbets and granitas, ice cold frappes, up to creamy-sweet milk ice cream and delicious cream ice cream that enchant your senses. Alina Henke not only gives useful tips and tricks concerning issues like manufacturing ice cream even without an ice cream machine or hygiene, but also gives information about the exciting history of ice cream which already began in ancient times. And of course, like with all our books from the mixtipp-Team, all recipes can be mixed super fast either with a TM 5 or a TM 31 - just the right thing for a hot summer day! 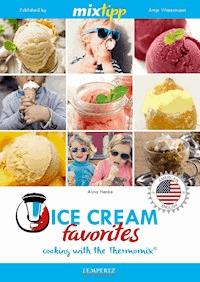 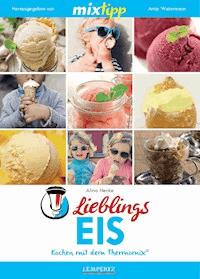 All rights reserved. No part of this book may be reproduced or transmitted in any form or by any means, electronic or mechanic, without permission from the publisher.

This cookbook has been written to the best of our knowledge and in good faith. Neither publisher nor author assumes any responsibility for unintentional reactions or adverse effects arising from processing of the ingredients.

The brand “Thermomix” is legally protected and is exclusively used as part of the recipes.

We shall not be liable for damages to persons or equipment arising from the preparations and cooking of the dishes.

Read and follow the application notes in the instruction manual of your Thermomix.

Printed and bound in Slovenia

The History of Ice Cream

Keep Calm and have Cinnamon

A piece of Ireland

The mixtipp-Team opens the ice cream season in Königswinter, Germany.

if you would have the choice for lunch between a healthy salad or some ice cream, would you go for chocolate or strawberry flavour?

Ice cream? Ice cream is always right! Whether as a dessert after a four-course-meal, a sweet snack, a comforter when you are sad or ill, a refreshment in summer or just so. Already Hippocrates said that fruit juice cooled with snow “as it livens the life juices and increases the well-being” even in illness.

We do not know anybody who does not like it. Ice cream comes in numerous different sorts and flavours, so there is certainly something for everyone.

Ice cream is popular all over the world, whether in warmer countries like Italy or Spain for instance, or in colder regions like Russia. Besides that, selling ice cream is a good business all year round. In Russia it is pretty common to stand in line freezing at an ice-cream vendor even when temperature is -30°C below. Germany has an average consume of about 8 litres per year, thus ranking in the middle of European countries and according to surveys, vanilla, strawberry and chocolate are the most popular flavours.

With this book, Alina Henke has compiled some fancy, colourful, and extraordinary ice cream versions that can be made at home simply with your Thermomix and a freezer. For our recipes you do not necessarily need an ice cream maker.

So have fun mixing your own favourites and enjoying them afterwards!

Even though many myths entwine around the history of ice cream, there are hardly any known facts about where and when the first ice cream was manufactured. Supposedly, ice as a delicacy which was produced in form of sorbet has its origin in China. In ancient times it then was spread over the Western world. The Greek and Persians already tried out various ingredients like different juices or aromas like rose water or saffron.

With the fall of the Roman Empire, this sort of delicacy fell into oblivion and only became popular in 14th century again. Since then Italy has been the leader in the manufacturing of ice cream.

The first ice cream parlour opened its doors in Paris at the end of the 17th century. This place was mostly frequented by members of the aristocracy and intellectuals. In this time, ice cream was seen as sheer luxury and was only consumed in noble circles. Until Nancy Johnson, a hausfrau from New Jersey developed the first ice cream machine which was driven by a crank handle in 1846. With this machine it became possible for everyone to produce ice cream in a larger scale. Thus, ice cream could finally take off on its victory lap in the Age of Industrialization.

Within 40 years (1859-1899) the ice cream production rose from one million to about 20 million litres. It was also in this time, when the ice cream cone was invented. At the St. Louis World Fair in 1904 ice cream became so popular that the only vendor ran out of dishes. Born out of necessity, he started a co-operation with a local baker. They both came up with the idea to sell ice cream in cones made out of waffles. This sensational concept has made its way until today.

In the second half of the 20th century more and more private households were furnished with cooling devices, which meant that they could store ice for a longer period of time or were able to make their own. This was the basis for developing new kinds of ice cream, most of all soft serve. With this kind, a great amount of air is mixed in, thereby reducing production costs. Later, some other variants were introduced like ice cream without dairy products for consumers with lactose intolerance or sugar-free ice cream flavours for diabetics.