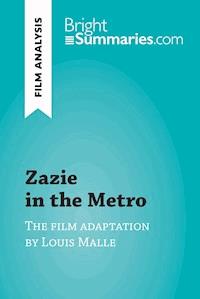 Zazie in the Metro by Louis Malle (Film Analysis) ebook

Unlock the more straightforward side of Zazie in the Metro with this concise and insightful summary and analysis!

This engaging summary presents an analysis of Zazie in the Metro, a novel by Raymond Queneau which was adapted for film in 1960 by Louis Malle. It centres around young Zazie as she explores Paris, meeting a homosexual drag queen and a policeman with various identities, amongst other interesting characters. The novel was incredibly successful in France, but the film was not as well received, perhaps due to its highly experimental nature. Malle employs many innovative cinematographic techniques in order to remain faithful to the idiosyncratic and experimental style of his source material. An acclaimed director, he received an Academy Award and the Palme d’Or at Cannes in 1956, and is one of only a few directors to have won the Golden Lion, the highest prize at the Venice Film Festival, multiple times.

Find out everything you need to know about Zazie in the Metro in a fraction of the time!

Why choose BrightSummaries.com?
Available in print and digital format, our publications are designed to accompany you in your reading journey. The clear and concise style makes for easy understanding, providing the perfect opportunity to improve your literary knowledge in no time.

Louis Malle was born in 1932 to a family of rich manufacturers and began filmmaking during his adolescence, using his father’s camera. He then studied at the Institut des hautes études cinématographiques (a prestigious film school in Paris) where he was chosen by Jacques Cousteau to become an assistant in the shooting of his documentary The Silent World (1955, awarded the Palme d’Or at the Cannes Film Festival in 1956). In 1958, at the age of 25, he created his first feature film, Elevator to the Gallows.

Louis Malle was an independent filmmaker, although it is possible to find similarities with the New Wave movement, and he decided to adapt Raymond Queneau’s novel Zazie in the Metro for the big screen in 1960. But, while the book sold well, the adaptation was not as successful as expected and sold barely 850 000 tickets. The audiences found the film disconcerting, as it seemed to resemble a stylistic exercise more than a traditional feature film.

Zazie in the Metro

Zazie Lalochère is a young girl, around 10 years old, who arrives to spend a few days in Paris with her mother. Her mother, who has a new lover and does not want to be tied down, leaves her daughter with Gabriel, her brother. Zazie, who dreams of discovering the metro, is particularly disappointed when she learns that it is on strike.