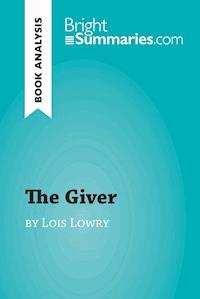 Unlock the more straightforward side of The Giver with this concise and insightful summary and analysis!

This engaging summary presents an analysis of The Giver by Lois Lowry, which follows a young boy in a futuristic society who is called on to become his community’s “Receiver of Memory”. As he shoulders the burden of his society’s collective memory, he soon realises that the apparently idyllic world he lives in is based on a shocking lie. As he uncovers the truth about the world around him, the reader is encouraged to reflect on profound themes such as individuality and conformism, euthanasia and the role of language in totalitarian societies. The Giver is the first novel in Lowry’s The Giver Quartet, and won the prestigious Newbery Medal for children’s literature in 1994. It was adapted into a film starring Jeff Bridges and Meryl Streep in 2014.

Find out everything you need to know about The Giver in a fraction of the time!

Why choose BrightSummaries.com?
Available in print and digital format, our publications are designed to accompany you on your reading journey. The clear and concise style makes for easy understanding, providing the perfect opportunity to improve your literary knowledge in no time.

Lois Lowry is an American children’s and young adult author. As the daughter of a military officer and, later on, the wife of a navy officer, she has travelled extensively from a very young age. She became interested in writing relatively late in life, publishing her first novel, Anastasia Krupnik, in 1979. She received the prestigious Newbery Medal for children’s literature in the USA in 1990 for Number the Stars, and again in 1994 for The Giver.

The Giver is the first novel in the The Giver Quartet series and is aimed at young adult readers. It draws inspiration from the great works of dystopian fiction (meaning works that describe an imaginary totalitarian society and the constraints it places on the lives of its citizens) of the first half of the 20th century, such as Brave New World (1932) by Aldous Huxley (English writer, 1894-1963) and 1984 (1949) by George Orwell (English writer, 1903-1950).

It tells the story of Jonas, a young boy living in a meticulously organised futuristic society, who is called upon to become the “Receiver of Memory”, the only bearer of the community’s collective memory, with everyone else living in blissful ignorance of their past. He begins learning about the role from his predecessor, and comes to realise that his little world is far less idyllic than he has always believed.

Jonas is an 11-year-old boy who lives in a futuristic society where daily life is regulated by very strict laws. The stability of the community as a whole depends upon the extreme limitation of personal freedoms. For example, citizens are not allowed to choose their own clothes, their job, their children’s names or even their spouse. Procreation is also forbidden. Pills are provided to supress individuals’ emotions and sexual desires, and newborns (“new-children”) are conceived in special centres. Any transgressions are severely punished, either by a message broadcast to the public over loudspeakers, or by a warning which may have further consequences: every day, weak children, the elderly and criminals are “released”, a mysterious word which the residents use without really understanding what it means, and that they equate with something called going “Elsewhere”.

Jonas is growing up in this colourless world, where every detail of every individual’s private life is painstakingly regulated. His family take meticulous care of him, but do not really show him any love. His sister is still very young, his mother works in the Department of Justice, and his father, who works as a Nurturer in the Nurturing Centre for newborns, is concerned about the health of one of the new-children, Gabriel. The baby is not growing as quickly as he should be, so Jonas’s father brings him home, where he can look after him more easily.