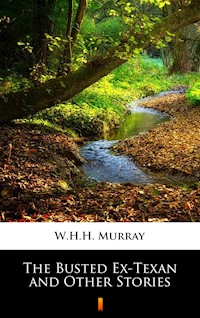 The Busted Ex-Texan and Other Stories ebook

The rumble of merry conversation mixed with the mumble of a stream; and from time to time a piece of a sweet song broke from melodious lips, short, energetic, melodious like a bobolink, rushing up from clover heads. And before the mighty shadow, gloomily lying on the great plain on the prairies, stretching east for a thousand miles, turned into darkness, active, happy workers gave the bivouac the kind of skillful ordering that a trained group always gives to any place. 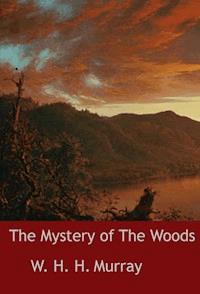 The Mystery of The Woods
W. H. H. Murray

THE LEAF OF RED ROSE

We were camped amid the foot-hills on the trail which led up to the Kicking Horse Pass. The sun had already passed from sight, beyond the white summits above us, and the shadow of the monstrous mountain range darkened the prairie to the east, to the horizon’s rim. Our bivouac was made in a grove of lofty firs, six or eight in number; and a little rivulet, trickling from the upper slopes, fell, with soft, lapsing sound, within a few feet of our camp-fire. We did not even pitch a tent, for the sky was mild, and above us the monstrous trees lifted their protecting canopy of stems. The hammocks were swung for the ladies, and each gentleman “preëmpted” the claim that suited him best, by depositing his blanket and rifle upon it. The entire party were in the best of spirits, and nature responded to our happiness in its kindest mood. Laughter sounded pleasantly at intervals from the busy groups, each working at some self-appointed industry. The hum of cheerful conversation mingled with the murmurs of the brook; and now and then the snatch of some sweet song would break from tuneful lips, brief, spirited, melodious as a bobolink’s, dashing upward from the clover-heads. And before the mighty shadow lying gloomily on the great prairie plain, which stretched eastward for a thousand miles, had grown to darkness, the active, happy workers had given to the bivouac that look of designed orderliness which a trained party always give to any spot they select in which to make a camp or pass a night. An hour before, there was nothing to distinguish that grove of trees, or the ground beneath them, from any other spot or hill within the reach of eye. But now it commanded the landscape; and, had you been trailing over the vast plain, the bright firelight, the group of men and women moving to and fro, the picketed horses, the fluttering bits of color here and there, would have caught your gaze ten miles away; and were you tired or hungry, or even lonesome, you would have naturally turned your horse’s head toward that camp as toward a cheerful reception and a home; for wherever is happy human life, to it all lonely life is drawn as by a magnet.

And this was demonstrated by our experience then and there. For, scarcely had we done with supper,–and by this time the gloom had grown to darkness, and the half-light of evening held the landscape,–when out of the semi-gloom there came a call,–the call of a man hailing a camp. Indeed, we were not sure he had not hailed several times before we heard him; for, to tell the truth, we were a very merry crowd, and as light of heart as if there was not a worry or care in all the world,–at least for us,–and the smallest spark of a joke exploded us like a battery. Indeed, so rollicking was our mood that our laughter was nearly continuous, and it is quite possible that the stranger may have hailed us more than once without our hearing him. And this was the more likely because the man’s voice was not of the loudest, nor was it positive in the energy of its appeal.

Indeed, there was a certain feebleness or timidity in the stranger’s hail, as if he was mistrustful that any good fortune could respond to him, and, hence, deprecated the necessity of the resort. But hear him we did at last, and he was greeted with a chorus of voices to “Come in! Come in! You’re welcome!” And partly because we had finished our repast, and partly from courtesy and the natural promptings of gentlefolk to give a visitor courteous greeting, we all arose and received him standing. And, certainly, had the kindly act been unusual with us, not one of our group would have regretted the extra condescension bestowed upon him at his coming, after he had entered the circle of our firelight, and we saw the expression of his features.

What a mirror the human face is! Looking into it, how we behold the soul, the accidents that have befallen it and the disappointments it has borne! Are not the faces of men as carved tablets on which we read the records of their lives? The face of childhood is smoothly beautiful, like a white page on which neither with ink of red or black has any pen drawn character. But, as the years go on, the pen begins to move and the fatal tracery to grow,–that tracery which means and tells so much. And the face of this man,–this waif, so to speak,–this waif that had come to us from the stretch of the prairie, whose southern line is the southern gulf; this stranger, who had come so suddenly to the circle of our light, and so plaintively sought admission to its comfort and its cheer, was a face which one might read at a glance. Not one in our circle that did not instantly feel that he embodied some overwhelming calamity. A look of sadness, of a mild, continuous sorrow, overspread his face. There was a pitiful expression about the mouth, as if brave determination had withdrawn its lines from it forever. From his eyes a certain mistrustfulness looked forth,–not mistrustfulness of others, but of himself,–as if confidence in his own powers had received an overwhelming shock. The man’s appearance made an instant and unmistakable impression upon the entire company. The ladies–God bless their sweet and sympathetic natures!–were profoundly moved at the pitiful aspect of our guest. Their bosoms thrilled with sympathy for one upon whose devoted head evil fortune had so evidently emptied its quiver. Nor were our less sensitive masculine natures untouched by his forlorn appearance.

“A target for evil fortune,” whispered Dick to the major.

“A regular bull’s-eye!” was the solemn response. “A bull’s-eye, by gad! at the end of the score.”

It was not a poetic expression. I wish the reader to note that I do not record it as such. I only preserve it as evidence of the major’s humanity, and of the unaffected sympathy for the stranger, which at that moment filled all hearts.

Naturally, as it can well be imagined, the gayety of our company had been utterly checked by the coming of our sad guest. In the presence of such a wreck of human happiness, perhaps of human hope, what person of any sensibility could maintain a lightsome mood? Had it not been for one peculiarity,–a peculiarity, I am confident, all of us observed,–the depression of our spirits would have been as profound as it was universal. This peculiarity was the stranger’s appetite. This, fortunately, had remained unimpaired,–an oasis in the Sahara of his life.

“The one remnant left him from the wreck of his fortunes,” whispered Dick.

For myself, acting as host to this appetite, and being naturally of a philosophic turn, I watched its development with the keenest interest, not to say with a growing curiosity. “Here is something,” I said to myself, “that is unique. That fine law of recompense which is kindly distributed through the universe finds here,” I reflected, “a most instructive and conclusive demonstration. Robbed, by an adverse fate, of all that made life agreeable, this man, this pilgrim of time, this wayfarer to eternity, this companion of mine on the road of life, has had bestowed upon him an extraordinary solace, has been permitted to retain a commensurate satisfaction. Surely, life cannot have lost its attractions for one whose stomach still preserves such aspirations.” And, prompted by the benevolence of my mood, and the anticipations of a wise forecast, I collected in front of me whatever edibles remained on the table, that, if the supply of our hospitality should prove insufficient, the exhibition of its spirit should at least be conclusive.

But, if the countenance of the stranger was of a most melancholy cast, there were not lacking hints that by nature he had been endowed with vivacity of spirit; for, as he continued, with an industry which was remarkable, to refresh himself, there were appearances, which came to the eye and the corners of his mouth, which made the observer conclude that he was not lacking the sense of humor; and, if his experience had been most unfortunate, there was in him an ability to appreciate the ludicrousness of its changeful situations. Indeed, one could but conclude that originally he must have been of a buoyant, not to say sanguine disposition; and, if one could but prevail upon him to narrate the incidents of his life, they would be found to be most entertaining.

It was something like an hour before our melancholy-looking guest had fully improved the opportunity with which a benignant Providence had supplied him,–a freak in which, one might conclude, she seldom indulged. He ceased to eat, and sat for a moment gazing pensively at the dishes. It seemed to me–but in this I may possibly be mistaken–that a darker shade of sadness possessed his face at the conclusion than the one that shadowed it so heavily at the beginning of the repast. “The pleasures of hope,” I said to myself, “are evidently greater to my species than are those of recollection. Now that there is nothing left for my guest to anticipate, it is evident that memory ceases to excite.” And I could but feel that, had our provisions been more abundant, the stranger’s appetite would not have been so easily appeased. With something of regret in my voice, I sought to divert his mind from that sense of disappointment which I judged from his countenance threatened to oppress his spirits.

“Friend,” I said, “I doubt not that you have trailed a goodly distance, and your fasting has been long?”

“I have not eaten a meal in two days,” was the response.

“Heavens!” exclaimed Dick in an aside to the major. “Is it credible that that man ate two days ago!”

“Gad!” exclaimed the major, “the man’s stomach is nothing but a pocket.”

“A pocket! I should call it an unexplored cavern!” retorted Dick.

“The direction and reason of your long trail would be interesting,” I resumed. “And, if not impertinent, friend, may I ask you whence you have come?”

“I have journeyed from Texas,” replied the man, and his voice nearly broke as he said it.

“Oh!„ exclaimed the ladies, and they sympathetically grouped themselves, anticipating, with true feminine sensitiveness, some terrible dénouement.