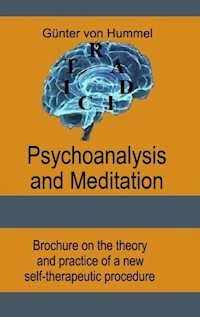 Linguistics and modern geometry today enable a connection between Psychoanalysis and Meditation that can also be experienced in practice. At the centre of such a connection lie the so-called formula-words which contaim several meanings in a single stroke of writing. Exactly in this form the unconscious is built up, which can be awakened, recognized and integrated into psychic life through meditative exercises.

The image on the cover page shows a so-called formula word (written on the image of the brain) which is at the centre of the procedure described in this book. It contains different meanings read from different letters of this Latin formulation, a structure that corresponds exactly to that of the unconscious. If one exercises such a formula word meditatively and repeatedly, the unconscious must release its own meaning. So in a few lines almost everything worth knowing about this book has been said, which should not prevent you from reading it anyway.

Introduction to the topic

First exercise of the Analytical Psychocatharsis

Second exercise of the Analytic Psychocatharsis

Psychoanalysis and meditation are not contradictory. As in one of the usual meditations, the psychoanalyst in his work must also go within himself and abandon himself to the initially unknown darkness as the meditator does.Freud called this an "equal attention", with and from which the therapist should listen to his client. The demand for such a passivity meant that the therapist in this moment cannot (or should not) think rationally and logically. But he is awake, oriented towards the statements of the patient, but still almost in light meditation. For it is important to hear the nuances in the speech of his patients and not the deliberately expressed arguments.

The therapist therefore listens to the completely free, spontaneous flow of speech ("free association") of his patient and has to pay attention to the small fluctuations, stagnations, slips of the tongue, but also to the peculiarities of dreams and fantasies told. In this way he can filter out hidden and repressed meanings, relate them to the therapeutic process and interpret them. Freud his self also expressed himself with regard to "equaly suspended attention" in such a way that the analyst should "turn his unconscious to the patient as a receiving organ".1 This sounds a little strange. For Freud could not quite clearly define how this kind of virgin conception was to take place, yet interpretations and interpretations are given from the context.

With the help of meditation all this is easier to understand. In a meditation one lets the spontaneous ideas, the "free associations" of psychoanalysis, pass by more pictorially. One must allow oneself to be "equally attentive", i.e. in the same way as the therapist also handles it in psychoanalysis. But one now waits (with the help of an exercise) until a meaning imposes itself of its own accord, i.e. directly from the unconscious, because it has an - even if not yet complete - interpretation, interpretation.It is entirely up to the structure of the exercise how it comes about that in meditative procedures such interpretations come about from the unconscious. However, the similarities between psychoanalysis and meditation are visible in the form of these two processes (equaly supended attention and free association). In meditative procedures they are usually given other names.

In analytical psychotherapy, feelings and meanings from earlier or current relationships are 'transferred' to the therapist. This 'transference' is unconscious and mostly positive, and the therapist can now give an interpretation of the various relationship events from the aspects 'transferred' to him. He is thus the pivot, the hinge, of the therapeutic dialogue, in short: the actual object, the 'transference'-object, while otherwise subject-related processes take place. In me-ditation, this 'transference' into the darkness, into the nothingness in front of you, takes place inside, and the interpretations must now come directly from the unconscious, and this also from a similar kind of 'transference' object, which I will comment on in detail later.

Of course there are also differences between psychoanalysis and meditation, in the methodical processing, in the further inner procedure, in the meaning of the intellect and other aspects. As much as - as he mentions - the procedure of Analytical Psychocatharsis is easy to learn in practice (only two concentrative exercises are required), it is also necessary to understand and accept the scientific background. A teacher whose personality you believe you can trust and who gives suggestive instructions is no longer enough. Therefore a short theoretical overview.

Already in the earliest human age, when wild, animistic ideas still prevailed, i.e. when it was assumed that everything was equally animated, there were these 'things' on the outside, which were connected to 'things' on the inside, and which interacted and were shaped by patterns of relationships. This interaction between inside and outside was thus formerly dominated by a universal principle of life and has moved mankind since time immemorial and still does today, even if it could never be clearly defined. The matter has not been improved by the modern sciences, also e.g. by something like the science of signs, the semiotics, in which one can connect the signs from inside and outside by identical structures. There is still something indeterminate and blurred about it.

Even in the natural sciences there is the well-known unsharpness-relation, namely that we cannot say anything precise about the smallest units of matter. According to the well-known American physicist L. Randall, we live in a multiverse, whereby the other parts of this multiverse are only 10-31 cm separated from our part.2 She uses this close connection between macro and micro sizes to describe the connection between quantum mechanics (physics of the very small) and relativity (physics of the very large) within the framework of so-called quantum gravity. But this is not solved and Randall also provides water for the mills of all the esotericists who now-more believe that they can explain all the forces that are accessible in and outside of man - such as psychokinesis or clairvoyance. After all, a parallel world, which - because it is insanely close - seems to be almost identical with us, explains every paranormal phenomenon. Quantums intertwine inside and outside, and the soul is nothing more than a quantum-gravitational state of communion inside the human being with the universe outside. This is not scientifically sustainable and thus remains inaccurate.

Similarly, in the humanities, the concept of a universal spirit, the idea of an all-pervading algorithmic information or God,3 in whose name religious communities wage war against each other because common faith, scripture and theology is not possible for all and thus remains indeterminate. Perhaps it is better from the outset not to start out from the spirit, from algorithmics, from God and not from matter and energy particles, but from units of meaning, i.e. from 'the real (effective) of words and images', which the psychoanalyst J. Lacan called signifiers following linguistics. Although the single signifier is not capable of a specific meaning, only the combination of meanings (signifiers) becomes more and more real. Thus, framed between two or more signifiers, man reveals himself as a subject to be grasped scientifically.4 He is then a being caught bet-ween the signifiers, between the 'real word and image', which receives its meaning from the nature of this catchment, and this can be confirmed for psychoanalysis and meditation alike.