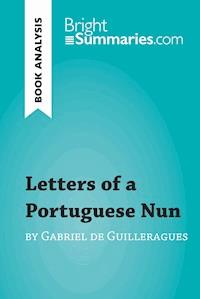 Unlock the more straightforward side of Letters of a Portuguese Nun with this concise and insightful summary and analysis!

This engaging summary presents an analysis of Letters of a Portuguese Nun by Gabriel de Guilleragues, which was originally published in 1669 in the guise of a collection of five genuine letters which had been written in Portuguese and then translated into French. Although completely anonymous, the letters are purportedly written by a young Portuguese nun and addressed to the object of her affections, a French soldier who seduced her and then abandoned her, but whom she still loves passionately. The letters were sensationally popular, but in the following centuries expert opinion gradually came to the consensus that they were in fact a work of fiction, and that Gabriel de Guilleragues, a diplomat who also served as the French ambassador to the Ottoman court, was probably the author.

Find out everything you need to know about Letters of a Portuguese Nun in a fraction of the time!

Why choose BrightSummaries.com?
Available in print and digital format, our publications are designed to accompany you on your reading journey. The clear and concise style makes for easy understanding, providing the perfect opportunity to improve your literary knowledge in no time.

Born in Bordeaux in 1628.Died in Constantinople in 1685.Notable works:Letters of a Portuguese Nun (1669), epistolary novel

Gabriel-Joseph de Lavergne, comte de Guilleragues was a French diplomat and writer. After working in the Bordeaux political sphere, he moved to Paris in 1666. During his time there, he began writing short plays which became his ticket into the Paris salons. He also acted as Secretary to the King’s Chamber and Cabinet before being chosen as the ambassador to the Ottoman court in 1677. However, history will always remember him as the author of a single work of literature: Letters of a Portuguese Nun (1669). This epistolary novel was published anonymously, and for many years it was believed that he had merely translated it into French from Portuguese, but the French version of the letters was actually the original version, and he was its author.

Letters of a Portuguese Nun

Passionate correspondence between a nun and a soldier

Letters of a Portuguese Nun was published anonymously by Claude Barbin in 1669, making it one of the first epistolary novels to be published in French. These letters tell the story of a Portuguese nun’s deep love for a French soldier who took advantage of her and has been ignoring her ever since, and were an instant success with readers, who were captivated by their unadorned descriptions of romantic passion – so much so that the Letters could easily pass for authentic love letters written by a real Portuguese nun. The Letters have since been conclusively attributed to Guilleragues, and are now considered a masterpiece of French literature.

An anonymous note informs the reader that the text that follows is a translation of authentic letters written in Portuguese to an unidentified young man.