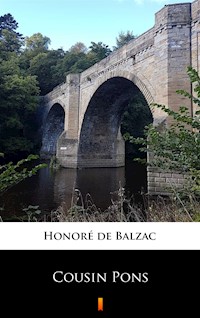 „Cousin Pons” is one of the last and greatest of Balzac’s novels of French urban society: a cynical, pessimistic but never despairing consideration of human nature. The book tells the story of Sylvain Pons, a poor moderately successful musician who is swindled by his wealthy relatives when they learn that his collection of art and antiques is worth a fortune. In contrast to his counterpart Cousin Bette, who seeks revenge against those who have humiliated her, Cousin Pons suffers passively as his health deteriorates and he eventually dies. The forces that come into play as Pons’ end approaches reveal the worst sides of the people around him, and give Balzac ample room to show the rougher side of his Parisians. The author shows how a person without means can be crushed by a society that has no values except material ones. 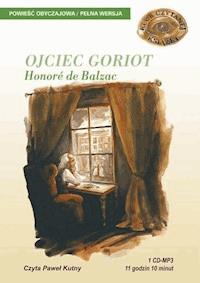 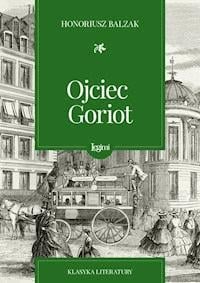 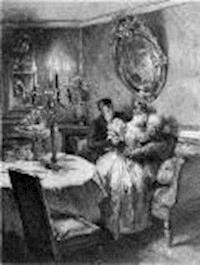 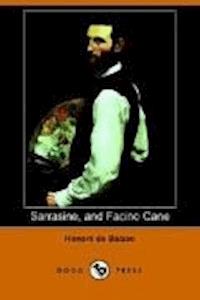 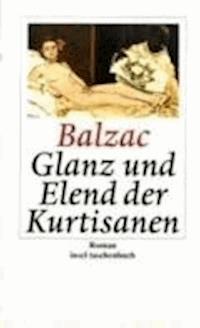 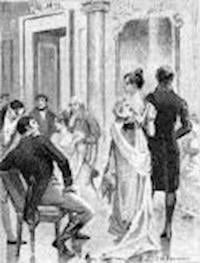 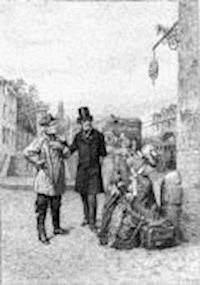 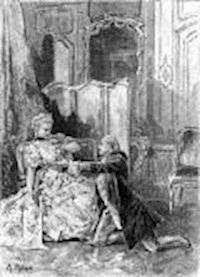 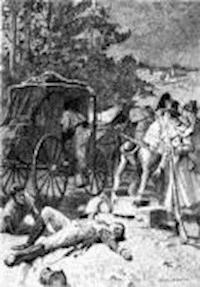 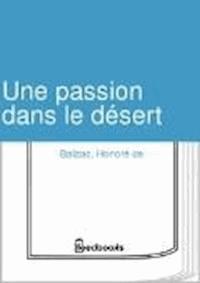 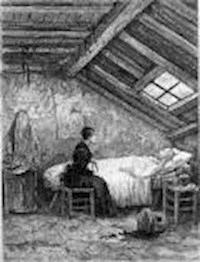 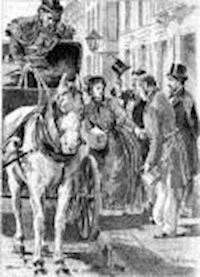 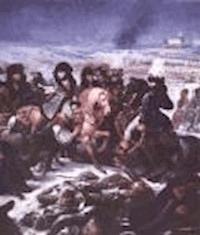 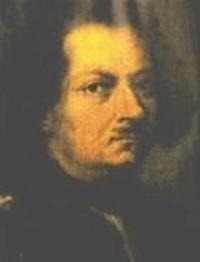 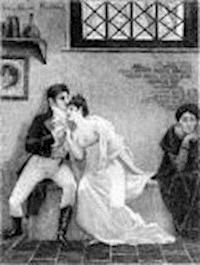 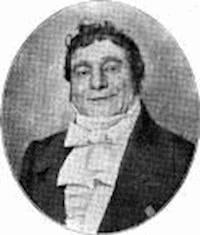 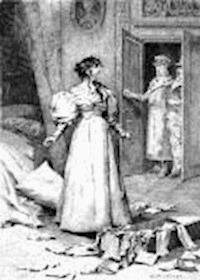 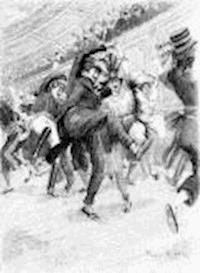 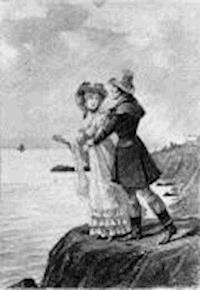 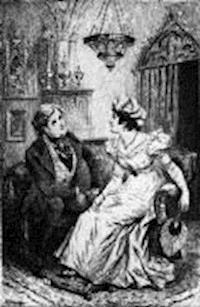 Towards three o’clock in the afternoon of one October day in the year 1844, a man of sixty or thereabouts, whom anybody might have credited with more than his actual age, was walking along the Boulevard des Italiens with his head bent down, as if he were tracking some one. There was a smug expression about the mouth–he looked like a merchant who has just done a good stroke of business, or a bachelor emerging from a boudoir in the best of humors with himself; and in Paris this is the highest degree of self-satisfaction ever registered by a human countenance.

As soon as the elderly person appeared in the distance, a smile broke out over the faces of the frequenters of the boulevard, who daily, from their chairs, watch the passers-by, and indulge in the agreeable pastime of analyzing them. That smile is peculiar to Parisians; it says so many things–ironical, quizzical, pitying; but nothing save the rarest of human curiosities can summon that look of interest to the faces of Parisians, sated as they are with every possible sight.

A saying recorded of Hyacinthe, an actor celebrated for his repartees, will explain the archaeological value of the old gentleman, and the smile repeated like an echo by all eyes. Somebody once asked Hyacinthe where the hats were made that set the house in a roar as soon as he appeared. “I don’t have them made,” he said; “I keep them!” So also among the million actors who make up the great troupe of Paris, there are unconscious Hyacinthes who “keep” all the absurd freaks of vanished fashions upon their backs; and the apparition of some bygone decade will startle you into laughter as you walk the streets in bitterness of soul over the treason of one who was your friend in the past.

In some respects the passer-by adhered so faithfully to the fashions of the year 1806, that he was not so much a burlesque caricature as a reproduction of the Empire period. To an observer, accuracy of detail in a revival of this sort is extremely valuable, but accuracy of detail, to be properly appreciated, demands the critical attention of an expert flaneur; while the man in the street who raises a laugh as soon as he comes in sight is bound to be one of those outrageous exhibitions which stare you in the face, as the saying goes, and produce the kind of effect which an actor tries to secure for the success of his entry. The elderly person, a thin, spare man, wore a nut-brown spencer over a coat of uncertain green, with white metal buttons. A man in a spencer in the year 1844! it was as if Napoleon himself had vouchsafed to come to life again for a couple of hours.

The spencer, as its name indicates, was the invention of an English lord, vain, doubtless, of his handsome shape. Some time before the Peace of Amiens, this nobleman solved the problem of covering the bust without destroying the outlines of the figure and encumbering the person with the hideous boxcoat, now finishing its career on the backs of aged hackney cabmen; but, elegant figures being in the minority, the success of the spencer was short-lived in France, English though it was.

At the sight of the spencer, men of forty or fifty mentally invested the wearer with top-boots, pistachio-colored kerseymere small clothes adorned with a knot of ribbon; and beheld themselves in the costumes of their youth. Elderly ladies thought of former conquests; but the younger men were asking each other why the aged Alcibiades had cut off the skirts of his overcoat. The rest of the costume was so much in keeping with the spencer, that you would not have hesitated to call the wearer “an Empire man,” just as you call a certain kind of furniture “Empire furniture;” yet the newcomer only symbolized the Empire for those who had known that great and magnificent epoch at any rate de visu, for a certain accuracy of memory was needed for the full appreciation of the costume, and even now the Empire is so far away that not every one of us can picture it in its Gallo-Grecian reality.

The stranger’s hat, for instance, tipped to the back of his head so as to leave almost the whole forehead bare, recalled a certain jaunty air, with which civilians and officials attempted to swagger it with military men; but the hat itself was a shocking specimen of the fifteen-franc variety. Constant friction with a pair of enormous ears had left their marks which no brush could efface from the underside of the brim; the silk tissue (as usual) fitted badly over the cardboard foundation, and hung in wrinkles here and there; and some skin-disease (apparently) had attacked the nap in spite of the hand which rubbed it down of a morning.

Beneath the hat, which seemed ready to drop off at any moment, lay an expanse of countenance grotesque and droll, as the faces which the Chinese alone of all people can imagine for their quaint curiosities. The broad visage was as full of holes as a colander, honeycombed with the shadows of the dints, hollowed out like a Roman mask. It set all the laws of anatomy at defiance. Close inspection failed to detect the substructure. Where you expected to find a bone, you discovered a layer of cartilaginous tissue, and the hollows of an ordinary human face were here filled out with flabby bosses. A pair of gray eyes, red-rimmed and lashless, looked forlornly out of a countenance which was flattened something after the fashion of a pumpkin, and surmounted by a Don Quixote nose that rose out of it like a monolith above a plain. It was the kind of nose, as Cervantes must surely have explained somewhere, which denotes an inborn enthusiasm for all things great, a tendency which is apt to degenerate into credulity.

And yet, though the man’s ugliness was something almost ludicrous, it aroused not the slightest inclination to laugh. The exceeding melancholy which found an outlet in the poor man’s faded eyes reached the mocker himself and froze the gibes on his lips; for all at once the thought arose that this was a human creature to whom Nature had forbidden any expression of love or tenderness, since such expression could only be painful or ridiculous to the woman he loved. In the presence of such misfortune a Frenchman is silent; to him it seems the most cruel of all afflictions–to be unable to please!

The man so ill-favored was dressed after the fashion of shabby gentility, a fashion which the rich not seldom try to copy. He wore low shoes beneath gaiters of the pattern worn by the Imperial Guard, doubtless for the sake of economy, because they kept the socks clean. The rusty tinge of his black breeches, like the cut and the white or shiny line of the creases, assigned the date of the purchase some three years back. The roomy garments failed to disguise the lean proportions of the wearer, due apparently rather to constitution than to a Pythagorean regimen, for the worthy man was endowed with thick lips and a sensual mouth; and when he smiled, displayed a set of white teeth which would have done credit to a shark.

A shawl-waistcoat, likewise of black cloth, was supplemented by a white under-waistcoat, and yet again beneath this gleamed the edge of a red knitted under-jacket, to put you in mind of Garat’s five waistcoats. A huge white muslin stock with a conspicuous bow, invented by some exquisite to charm “the charming sex” in 1809, projected so far above the wearer’s chin that the lower part of his face was lost, as it were, in a muslin abyss. A silk watch-guard, plaited to resemble the keepsakes made of hair, meandered down the shirt front and secured his watch from the improbable theft. The greenish coat, though older by some three years than the breeches, was remarkably neat; the black velvet collar and shining metal buttons, recently renewed, told of carefulness which descended even to trifles.

The particular manner of fixing the hat on the occiput, the triple waistcoat, the vast cravat engulfing the chin, the gaiters, the metal buttons on the greenish coat,–all these reminiscences of Imperial fashions were blended with a sort of afterwaft and lingering perfume of the coquetry of the Incroyable–with an indescribable finical something in the folds of the garments, a certain air of stiffness and correctness in the demeanor that smacked of the school of David, that recalled Jacob’s spindle-legged furniture.

At first sight, moreover, you set him down either for the gentleman by birth fallen a victim to some degrading habit, or for the man of small independent means whose expenses are calculated to such a nicety that the breakage of a windowpane, a rent in a coat, or a visit from the philanthropic pest who asks you for subscriptions to a charity, absorbs the whole of a month’s little surplus of pocket-money. If you had seen him that afternoon, you would have wondered how that grotesque face came to be lighted up with a smile; usually, surely, it must have worn the dispirited, passive look of the obscure toiler condemned to labor without ceasing for the barest necessaries of life. Yet when you noticed that the odd-looking old man was carrying some object (evidently precious) in his right hand with a mother’s care; concealing it under the skirts of his coat to keep it from collisions in the crowd, and still more, when you remarked that important air always assumed by an idler when intrusted with a commission, you would have suspected him of recovering some piece of lost property, some modern equivalent of the marquise’s poodle; you would have recognized the assiduous gallantry of the “man of the Empire” returning in triumph from his mission to some charming woman of sixty, reluctant as yet to dispense with the daily visit of her elderly attentif.

In Paris only among great cities will you see such spectacles as this; for of her boulevards Paris makes a stage where a never-ending drama is played gratuitously by the French nation in the interests of Art.