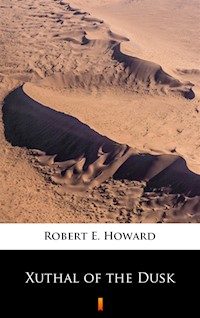 Xuthal of the Dusk ebook

The desert shimmered in the heat waves. Conan the Cimmerian stared out over the aching desolation and involuntarily drew the back of his powerful hand over his blackened lips. He stood like a bronze image in the sand, apparently impervious to the murderous sun, though his only garment was a silk loin-cloth, girdled by a wide gold-buckled belt from which hung a saber and a broad-bladed poniard. On his clean-cut limbs were evidences of scarcely healed wounds.

THE desert shimmered in the heat waves. Conan the Cimmerian stared out over the aching desolation and involuntarily drew the back of his powerful hand over his blackened lips. He stood like a bronze image in the sand, apparently impervious to the murderous sun, though his only garment was a silk loin-cloth, girdled by a wide gold-buckled belt from which hung a saber and a broad-bladed poniard. On his clean-cut limbs were evidences of scarcely healed wounds.

At his feet rested a girl, one white arm clasping his knee, against which her blond head drooped. Her white skin contrasted with his hard bronzed limbs; her short silken tunic, lownecked and sleeveless, girdled at the waist, emphasized rather than concealed her lithe figure.

Conan shook his head, blinking. The sun’s glare half blinded him. He lifted a small canteen from his belt and shook it, scowling at the faint splashing within.

The Cimmerian growled wordlessly, glaring truculently at the surrounding waste, with outthrust jaw, and blue eyes smoldering savagely from under his black tousled mane, as if the desert were a tangible enemy.

He stooped and put the canteen to the girl’s lips.

“Drink till I tell you to stop, Natala,” he commanded.

She drank with little panting gasps, and he did not check her. Only when the canteen was empty did she realize that he had deliberately allowed her to drink all their water supply, little enough that it was.

Tears sprang to her eyes. “Oh, Conan,” she wailed, wringing her hands, “why did you let me drink it all? I did not know–now there is none for you!”

“Hush,” he growled. “Don’t waste your strength in weeping.”

Straightening, he threw the canteen from him.

“Why did you do that?” she whispered.

He did not reply, standing motionless and immobile, his fingers closing slowly about the hilt of his saber. He was not looking at the girl; his fierce eyes seemed to plumb the mysterious purple hazes of the distance.

Endowed with all the barbarian’s ferocious love of life and instinct to live, Conan the Cimmerian yet knew that he had reached the end of his trail. He had not come to the limits of his endurance, but he knew another day under the merciless sun in those waterless wastes would bring him down. As for the girl, she had suffered enough. Better a quick painless sword-stroke than the lingering agony that faced him. Her thirst was temporarily quenched; it was a false mercy to let her suffer until delirium and death brought relief. Slowly he slid the saber from its sheath.

He halted suddenly, stiffening. Far out on the desert to the south, something glimmered through the heat waves.

At first he thought it was a phantom, one of the mirages which had mocked and maddened him in that accursed desert. Shading his sun-dazzled eyes, he made out spires and minarets, and gleaming walls. He watched it grimly, waiting for it to fade and vanish. Natala had ceased to sob; she struggled to her knees and followed his gaze.

The Cimmerian did not reply for a space. He closed and opened his eyes several times; he looked away, then back. The city remained where he had first seen it.

He thrust the saber back in its sheath. Stooping, he lifted Natala in his mighty arms as though she had been an infant. She resisted weakly.

“Don’t waste your strength carrying me, Conan,” she pleaded. “I can walk.”

“The ground gets rockier here,” he answered. “You would soon wear your sandals to shreds,” glancing at her soft green footwear. “Besides, if we are to reach that city at all, we must do it quickly, and I can make better time this way.”

The chance for life had lent fresh vigor and resilience to the Cimmerian’s steely thews. He strode out across the sandy waste as if he had just begun the journey. A barbarian of barbarians, the vitality and endurance of the wild were his, granting him survival where civilized men would have perished.

He and the girl were, so far as he knew, the sole survivors of Prince Almuric’s army, that mad motley horde which, following the defeated rebel prince of Koth, swept through the Lands of Shem like a devastating sandstorm and drenched the outlands of Stygia with blood. With a Stygian host on its heels, it had cut its way through the black kingdom of Kush, only to be annihilated on the edge of the southern desert. Conan likened it in his mind to a great torrent, dwindling gradually as it rushed southward, to run dry at last in the sands of the naked desert. The bones of its members–mercenaries, outcasts, broken men, outlaws–lay strewn from the Kothic uplands to the dunes of the wilderness.

From that final slaughter, when the Stygians and the Kushites closed in on the trapped remnants, Conan had cut his way clear and fled on a camel with the girl. Behind them the land swarmed with enemies; the only way open to them was the desert to the south. Into those menacing depths they had plunged.

The girl was Brythunian, whom Conan had found in the slave-market of a stormed Shemite city, and appropriated. She had had nothing to say in the matter, but her new position was so far superior to the lot of any Hyborian woman in a Shemitish seraglio, that she accepted it thankfully. So she had shared in the adventures of Almuric’s damned horde.

For days they had fled into the desert, pursued so far by Stygian horsemen that when they shook off the pursuit, they dared not turn back. They pushed on, seeking water, until the camel died. Then they went on foot. For the past few days their suffering had been intense. Conan had shielded Natala all he could, and the rough life of the camp had given her more stamina and strength than the average woman possesses; but even so, she was not far from collapse.

The sun beat fiercely on Conan’s tangled black mane. Waves of dizziness and nausea rose in his brain, but he set his teeth and strode on unwaveringly. He was convinced that the city was a reality and not a mirage. What they would find there he had no idea. The inhabitants might be hostile. Nevertheless it was a fighting chance, and that was as much as he had ever asked.

The sun was nigh to setting when they halted in front of the massive gate, grateful for the shade. Conan stood Natala on her feet, and stretched his aching arms. Above them the walls towered some thirty feet in height, composed of a smooth greenish substance that shone almost like glass. Conan scanned the parapets, expecting to be challenged, but saw no one. Impatiently he shouted, and banged on the gate with his saber hilt, but only the hollow echoes mocked him. Natala cringed close to him, frightened by the silence. Conan tried the portal, and stepped back, drawing his saber, as it swung silently inward. Natala stifled a cry.