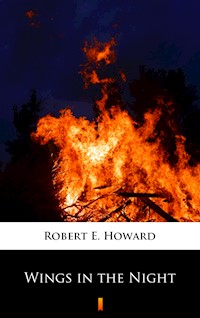 Wings in the Night ebook

Wings in the Night collects Robert E. Howard’s fiction and prose published in Weird Tales Magazine from July 1932 to May 1933. These works represent literary stepping-stones to Howard’s infamous Cthulhu mythos stories and his most famous character of all -- Conan the Cimmerian -- and ably demonstrate that each of Howard’s stories improved and added to his formidable skills as a master of fantasy and adventure.

I. THE HORROR ON THE STAKE

II. THE BATTLE IN THE SKY

III. THE PEOPLE IN THE SHADOW

IV. THE MADNESS OF SOLOMON

I. THE HORROR ON THE STAKE

SOLOMON KANE leaned on his strangely carved staff and gazed in scowling perplexity at the mystery which spread silently before him. Many a deserted village Kane had seen in the months that had passed since he turned his face east from the Slave Coast and lost himself in the mazes of jungle and river, but never one like this.

It was not famine that had driven away the inhabitants, for yonder the wild rice still grew rank and unkempt in the untilled fields. There were no Arab slave-raiders in this nameless land–it must have been a tribal war that devastated the village, Kane decided, as he gazed sombrely at the scattered bones and grinning skulls that littered the space among the rank weeds and grasses. These bones were shattered and splintered, and Kane saw jackals and a hyena furtively slinking among the ruined huts. But why had the slayers left the spoils? There lay war spears, their shafts crumbling before the attacks of the white ants. There lay shields, mouldering in the rains and sun. There lay the cooking pots, and about the neck-bones of a shattered skeleton glistened a necklace of gaudily painted pebbles and shells– surely rare loot for any savage conqueror.

He gazed at the huts, wondering why the thatch roofs of so many were torn and rent, as if by taloned things seeking entrance. Then something made his cold eyes narrow in startled unbelief. Just outside the mouldering mound that was once the village wall towered a gigantic baobab tree, branchless for sixty feet, its mighty bole too large to be gripped and scaled. Yet in the topmost branches dangled a skeleton, apparently impaled on a broken limb.

The cold hand of mystery touched the shoulder of Solomon Kane. How came those pitiful remains in that tree? Had some monstrous ogre’s inhuman hand flung them there?

Kane shrugged his broad shoulders and his hand unconsciously touched the black butts of his heavy pistols, the hilt of his long rapier, and the dirk in his belt. Kane felt no fear as an ordinary man would feel, confronted with the Unknown and Nameless. Years of wandering in strange lands and warring with strange creatures had melted away from brain, soul, and body all that was not steel and whalebone. He was tall and spare, almost gaunt, built with the savage economy of the wolf. Broad-shouldered, long-armed, with nerves of ice and thews of spring steel, he was no less the natural killer than the born swordsman.

The brambles and thorns of the jungle had dealt hardly with him; his garments hung in tatters, his featherless slouch hat was torn and his boots of Cordovan leather were scratched and worn. The sun had baked his chest and limbs to a deep bronze, but his ascetically lean face was impervious to its rays. His complexion was still of that strange, dark pallor which gave him an almost corpse-like appearance, belied only by his cold, light eyes.

And now Kane, sweeping the village once more with his searching gaze, pulled his belt into a more comfortable position, shifted to his left hand the cat-headed stave N’Longa had given him, and took up his way again.

To the west lay a strip of thin forest, sloping downward to a broad belt of. savannas, a waving sea of grass waist-deep and deeper. Beyond that rose another narrow strip of woodlands, deepening rapidly into dense jungle. Out of that Jungle Kane had fled like a hunted wolf with pointed-toothed men hot on his trail. Even now a vagrant breeze brought faintly the throb of a savage drum which whispered its obscene tale of hate and blood-hunger and belly-lust across miles of jungle and grassland.

The memory of his flight and narrow escape was vivid in Kane’s mind, for only the day before had he realized too late that he was in cannibal country, and all that afternoon in the reeking stench of the thick jungle, he had crept and run and hidden and doubled and twisted on his track with the fierce hunters ever close behind him, until night fell and he gained and crossed the grasslands under cover of darkness.

Now in the late morning he had seen nothing, heard nothing of his pursuers, yet he had no reason to believe that they bad abandoned the chase. They had been close on his heels when he took to the savannas.

So Kane surveyed the Land in front of him. To the east, curving from north to south ran a straggling range of hills, for the most part dry and barren, rising in the south to a jagged black skyline that reminded Kane of the black hills of Negari. Between him and these hills stretched a broad expanse of gently rolling country, thickly treed, but nowhere approaching the density of a Jungle. Kane got the impression of a vast upland plateau, bounded by the curving hills to the east and by the savannas to the west.

Kane set out for the hills with his Long, swinging, tireless stride. Surely somewhere behind him the savage demons were stealing after him, and he had no desire to be driven to bay. A shot might send them flying in sudden terror, but on the other hand, so low they were in the scale of humanity, it might transmit no supernatural fear to their dull brains. And not even Solomon Kane, whom Sir Francis Drake had called Devon’s king of swords, could win in a pitched battle with a whole tribe.

The silent village with its burden of death and mystery faded out behind him. Utter silence reigned among these mysterious uplands where no birds sang and only a silent macaw flitted among the great trees. The only sounds were Kane’s cat-like tread, and the whisper of the drum-haunted breeze.

And then Kane caught a glimpse among the trees that made his heart leap with a sudden, nameless horror, and a few moments later he stood before Horror itself, stark and grisly, In a wide clearing, on a rather bold incline stood a grim stake, and to this stake was bound a thing that had once been a man. Kane had rowed, chained to the bench of a Turkish galley, and he had toiled in Barbary vineyards; he had battled red Indians in me New Lands and had languished in the dungeons of Spain’s Inquisition. He knew much of the fiendishness of man’s inhumanity, but now he shuddered and grew sick. Yet it was not so much the ghastliness of the mutilations, horrible as they were, that shook Kane’s soul, but the knowledge that the wretch still lived.

For as he drew near, the gory head that lolled on the butchered breast lifted and tossed from side to side. spattering blood from the stumps of ears, while a bestial, rattling whimper drooled from the shredded lips.

Kane spoke to the ghastly thing and it screamed unbearably, writhing in incredible contortions. while its head jerked up and down with the jerking of mangled nerves, and the empty, gaping eye-sockets seemed striving to see from their emptiness. And moaning low and brain-shatteringly it huddled its outraged self against the stake where it was bound and lifted its head in a grisly attitude of listening, as if it expected something out of the skies.

“Listen,” said Kane, in the dialect of the river tribes. “Do not fear me –I will not harm you and nothing else shall harm you any more. I am going to loose you.”

Even as he spoke Kane was bitterly aware of the emptiness of his words. But his voice had filtered dimly into the crumbling, agony-shot brain of the man before him. From between splintered teeth fell words, faltering and uncertain, mixed and mingled with the slavering droolings of imbecility. He spoke a language akin to the dialects Kane had learned from friendly river folk on his wanderings, and Kane gathered that he had been bound to the stake for a long time–many moons, he whimpered in the delirium of approaching death; and all this time, inhuman, evil things had worked their monstrous will upon him. These things he mentioned by name, but Kane could make nothing of it for he used an unfamiliar term that sounded like akaana. But these things had not bound him to the stake, for the torn wretch slavered the name of Goru, who was a priest and who had drawn a cord too tight about his legs–and Kane wondered that the memory of this small pain should linger through the red mazes of agony that the dying man should whimper over it.

And to Kane’s horror, the man spoke of his brother who had aided in the binding of him, and he wept with infantile sobs. Moisture formed in the empty sockets and made tears of blood. And he muttered of a spear broken long ago in some dim hunt, and while he muttered in his delirium, Kane gently cut his bonds and eased his broken body to the grass. But even at the Englishman’s careful touch, the poor wretch writhed and howled like a dying dog, while blood started anew from a score of ghastly gashes, which, Kane noted, were more like the wounds made by fang and talon than by knife or spear. But at last it was done and the bloody, torn thing lay on the soft grass with Kane’s, old slouch hat beneath its death’s-head, breathing in great, rattling gasps.

Kane poured water from his canteen between the mangled lips, and bending close, said: “Tell me more of these devils, for by the God of my people, this deed shall not go unavenged, though Satan himself bar my way.”

It is doubtful if the dying man heard. But he heard something else. The macaw, with the curiosity of its breed, swept from a near-by grove and passed so close its great wings fanned Kane’s hair. And at the sound of those wings, the butchered man heaved upright and screamed in a voice that haunted Kane’s dreams to the day of his death: ‘“The wings! the wings! They come again! Ahhh, mercy, the wings!”

And the blood burst in a torrent from his lips and so he died.